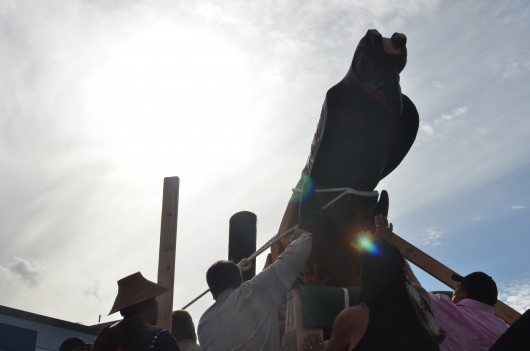 Ketchikan’s newest totem pole arrived with a massive crowd Saturday in front of the Vigor shipyard. It’s the first totem pole raised in about two years, and tribal and non-tribal community members alike cheered as it came through the crowd.

This was the sound of the totem pole being brought from the Vigor warehouse on Saturday to its current prominent position just off of Tongass Avenue.

Hundreds showed up from around town and neighboring communities, including highly regarded members of local tribes and Vigor representatives.

Vigor General Manager Mark Pearson says the idea to carve a totem pole for the shipyard came in the winter of 2013. Pearson added that Vigor members wanted to have more native art to show the connection between the company and its community.

“So it has to be an expression of our willingness to do more for the community, and to include all of the community. Any time we’re exclusionary or any time we’re insensitive to the differences in people, we limit ourselves.” 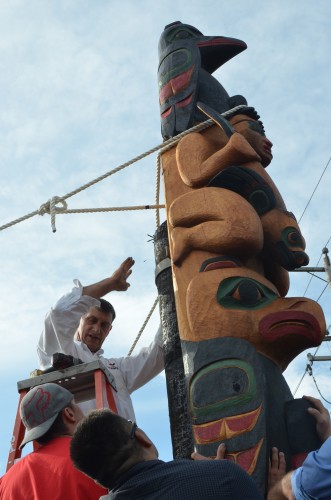 Vigor CEO Frank Foti came from Portland for the ceremony, and says that he wants his company to connect with all people, making sure natives and women were included.

“Vigor means effort, energy, good health, renewal.  It’s part of who we are. My color today is pink and part of it is to bring some of the feminine energy into what we do. We have a tremendous group of men and women that are part of what we do. To you I say ‘Háw’aa! T’oyaxs-nsm! GunalchÈesh!” (Thank you in Haida, Tsimshian, and Tlingit, respectively)

After much struggle to raise the pole with manpower alone, a group of about a dozen people pushed, pulled and heaved the structure into place.

After the new pole was in place, the celebrating continued up at the Ted Ferry Civic Center. There was food, singing and hours of dancing, along with gifts for those who made the pole raising possible.

Metlakatla’s mayor, Audrey Hudson came forward to show her appreciation to those who put so much effort into the raising of this particular totem pole. She was especially grateful to the carver who brought the pole to life.

“I feel blessed to have witnessed a new totem pole today. Totem poles are a powerful symbol for both our peoples. These events serve to strengthen the ancient relationship between the Tlingit and Tsimshian, between Metlakatla and Ketchikan. My hats off to Jon Rowen for his beautiful work.”

Rowen, a Tlingit from Klawock on Prince of Wales Island, thanked Mayor Hudson, his cousin, for the kind words, but said little during the ceremony.

Vigor CEO Frank Foti, however, had a lot to say, mostly out of thanks. Many tribal leaders gave Foti gifts that night, including a hand-carved paddle, abalone inlaid hummingbird bath, and a new nickname: chief.  Foti thanked everyone for their help, especially tribal members who taught him about the culture in the land surrounding his Ketchikan shipyard.

“Connecting what we do and what we build with who we are and the land that we live in is…it’s a constant conflict. We build with organic and inorganic materials. We impact the world we live in. We make it better, we make it worse. We look at why. That’s who we are and who we try to be. We are honored to be somewhat part, and learn to be part of a tribe.”

And then, as the opening remarks drew to a close, it was time for the song and dance, lasting late into the night. 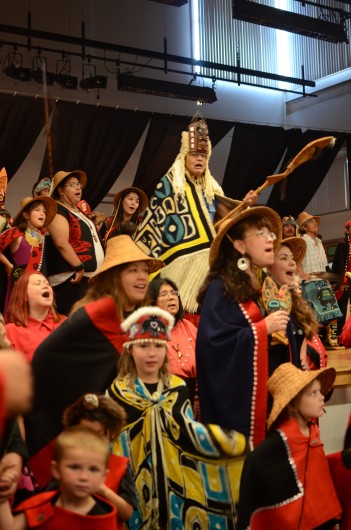 This story has been corrected from the original, which had stated that the carver is from Metlakatla. Jon Rowan is from Klawock.