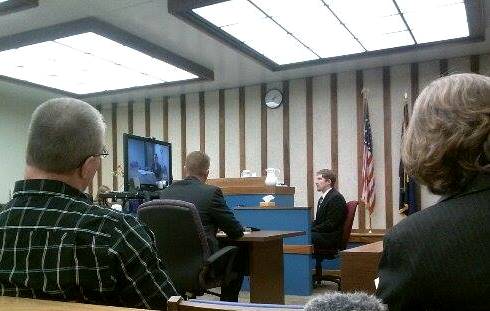 Testimony continued Wednesday in the trial of a Ketchikan man accused of sexually assaulting his 14-year-old stepdaughter, starting with the cross-examination of the now 16-year-old alleged victim. Fifty-year-old David Mason is accused of four separate counts of sexual assault on a minor in a trial at in Ketchikan Superior Court that is expected to last through Friday.

Some of the content of this report is of an explicit nature and may not be appropriate for younger audiences.

The alleged victim finished her testimony Wednesday, consenting that Mason did  assault her. During the girl’s testimony, she also said others tell her that she hugs people in her sleep, and that this incident occurred completely in a half-asleep state for her.

The next to testify was Ketchikan Police Officer Charles Johnson. Johnson talked to the daughter after the incident. He met the  girl and her mother at the Women in Safe Homes, or WISH, shelter. He says the mother accused Mason of rape, and he found the daughter upset, “verging on hysterical.”

“Really heavy crying, shortness of breath. I remember she was sitting on a couch, and one of her legs just had this, like a jackhammer, just bouncing really hard, really fast. Not able to answer questions right away. Pretty distraught.”

The defense questioned Officer Johnson as to why he didn’t separate the mother and daughter immediately. Through this, the defense insinuated that because the mother made accusations against her husband in front of her daughter, who has developmental disabilities, it could have influenced what her daughter remembered about the incident.

The girl also told the jury that she is easily affected by emotions of those around her.

Others on the stand included Sergeant Carlos Rojas, who also met with the mother and daughter and documented the alleged crime scene, and nurse Crystal Pennino, who examined the daughter. Pennino also collected any DNA evidence to send to the state crime lab.

Final testimony for the day came from Forensic Scientist Jennifer Foster, who testified to finding Mason’s DNA on the girl, and the girl’s DNA on Mason. It is likely that the DNA on Mason  came from the act of rape, but there is also a chance that it came from excess skin cells transferred by other means.

The defense claims that Mason initiated contact out of mistaken identity, thinking the girl was her mother after the girl climbed into bed with both the mother and stepfather that night.

The trial will continue tomorrow (Thursday) with the final witness being Mason himself. After his testimony and closing arguments, the case will go to the jury.