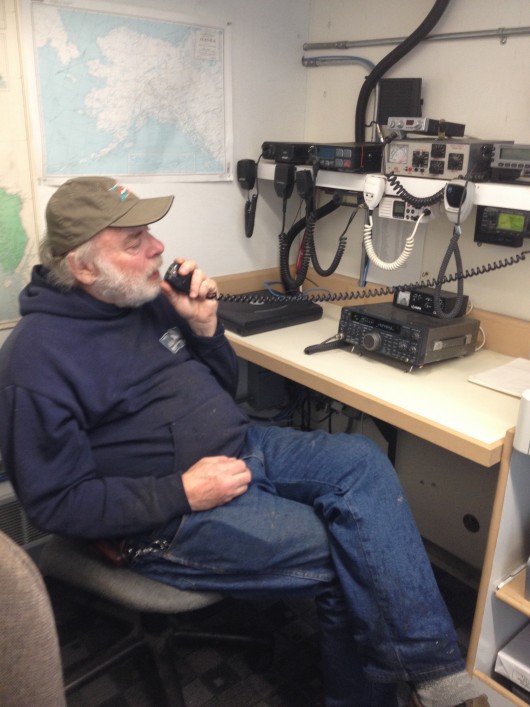 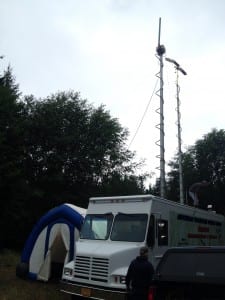 Volunteers set up antenna on the KRVS van

August 4th marked the 225th anniversary of the United States Coast Guard. To commemorate the day, the Ketchikan Volunteer Rescue Squad set up its communications van to broadcast from the site of a former Coast Guard high-frequency radio station.

Local ham radio operators, some also with the KVRS, and at least one member of the Coast Guard gathered at the site Tuesday morning. They were there to talk to ham radio stations around the country and the world, as well as to honor the history of the former station. As others set up an antenna on the communications van, Coast Guard Electronic Technician Mike Leska gave me a tour of the Point Higgins site. 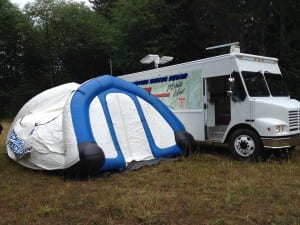 “There used to be barracks up there, a little dining facility, I think the C.O. had his own house. There were live watch standards that stood a live watch 24-7 that would listen to the radio for distress calls and they were also in charge of sending out broadcasts like weather information and maritime safety-related notices and things like that.

Leska says over time, and with improvements in technology, facilities were consolidated and the Ketchikan station closed. The Ketchikan site still has two antennas, and equipment is housed in a small container shed. Transmissions to that site are monitored remotely from Kodiak.

“There was a cook, a chief engineman who had a couple of helpers to keep the generators operating and they tended to the mechanical parts of the operation. There were a couple of electronic technicians who maintained all the equipment. It was great. I just loved it out here.” 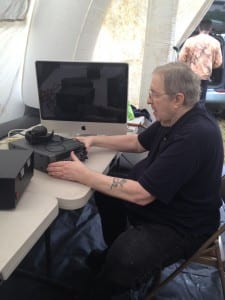 Kern says even though the buildings are gone and the forest encroaching, he occasionally visits the site, usually for berry picking. He says one walk sparked an idea.

“I was saying, this would be a great place to do some ham radio activities out of just for old time sake to reactivate the site. So, with the Coast Guard’s 225th birthday today, what better opportunity is there to do that.”

Chris John is with the Ketchikan Volunteer Rescue Squad and a ham radio operator. He says the KVRS van provides support for local search and rescue efforts and is used for all types of communications. Though they don’t usually rely on ham radios, John says a need is possible and Tuesday provided an opportunity to practice.

“There’s a potential or the hams coming in and assisting KVRS and also city agencies with communications. So this is partly to familiarize the newer hams in town and retrain the ones who have been here a long time and haven’t done it for a while.”

Gary Freitag is also a ham radio operator in Ketchikan. From the communications van, he spoke with other operators excited about the opening of the site, including Darlene in Dora Bay. 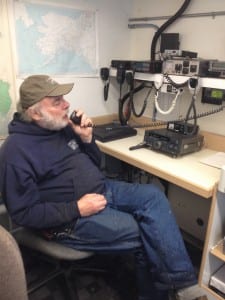 Darlene: “So it’s going well then?”

Darlene: Well that’s good, and so you’re out playing and having fun and successes. I can’t believe. You’re about the luckiest fella there is.”

Freitag: “Well I don’t know about that, but it’s fun.”

While Freitag logged in the call signals for each operator contacted, Kern was in a tent next to the van setting up his radio equipment. Kern told me he planned to primarily broadcast in Morse code in honor of the old days.

In addition to Alaska, they were able to contact stations as far away as England and Japan. At least for a few hours, the Ketchikan site was brought back to life with the help of a few ham radio enthusiasts.