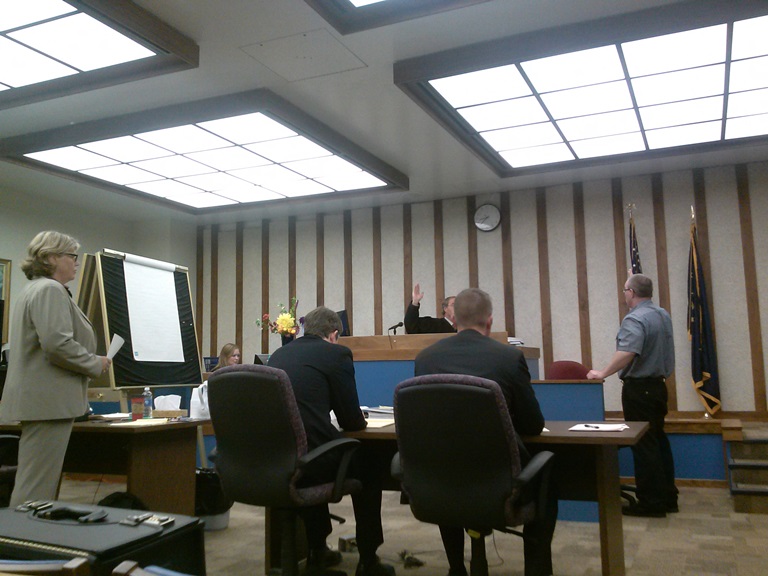 Testimony concluded Thursday in the trial of a Ketchikan man accused of sexually assaulting his 14-year-old step-daughter. The accused – 50-year-old David Mason – was the final witness. Mason is charged with four separate counts of sexual assault of a minor from one incident, with a maximum penalty of over 300 years in prison.

Some of the content of this report is explicit and may not be appropriate for younger audiences.

David Mason took the stand in Ketchikan Superior Court. He said he didn’t know his stepdaughter came into the queen-sized pullout bed he shared with his wife on the night of the incident. He said that he and his wife had argued earlier that day, and he wanted to make up with her. He said when he felt someone hugging him from behind, he thought it was his wife, and he engaged in sexual behavior with that person.

“It’s just a natural assumption that it’s my wife. I don’t if it’s so much a thought process as a just an assumption.”

Mason said he stopped before actually having sex. He claimed he discovered that this was not his wife, but his 14-year-old stepdaughter when he asked her a question and her response didn’t sound like his wife.

After the discovery, Mason said his wife woke up and, upon seeing him and her daughter without much clothing, she assumed the worst, taking her daughter to the Women in Safe Homes, or WISH, shelter.

In closing arguments, State Prosecutor Ben Hofmeister argued that Mason had to know this was his stepdaughter because of certain circumstances. These circumstances included the size of the queen bed containing three people, and there was light in the room cast from the TV left on a music channel. Mason’s wife was also using an oxygen machine that makes noise.

Hofmeister then brought up DNA evidence from the girl found on Mason, which he argued was in a large enough amount to suggest rape.

In rebuttal, defense attorney Marcelle McDannel said that the amount of DNA found does not provide enough certainty to convict Mason beyond a reasonable doubt and that its origins are questionable. McDannel agreed that the girl’s testimony about the incident was sad, but also said that this girl, who has developmental disabilities, was easily effected by the environment around her.

“Ya know, can we give this credibility? Can we judge this as a verifiable act? Or do we have to take what she says and really distrust it because it doesn’t match any of the objective physical evidence.”

The girl had just been visiting her mother when the incident occurred, and was raised by her grandparents, with whom she still lives.

After four days of trial and three days of testimony, now it’s up to the jury.

The jury is expected to reach a decision either Thursday night or Friday. KRBD will report the verdict as soon as it is available.