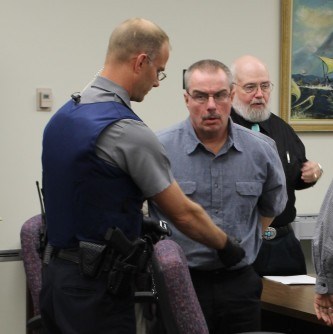 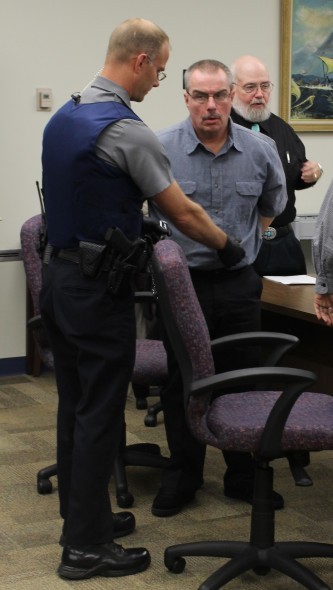 David Mason (center) is handcuffed Friday after 12 jurors found him guilty of two counts of sexual assault of a minor.

“The verdict reads as follows: We the jury find the defendant, David Mason, guilty as charged in count one of sexual abuse of a minor in the first degree.”

Ketchikan Superior CourtJudge William Carey continued on to say that the jury also found Mason guilty of second-degree sexual abuse of a minor. Mason was found not guilty on two other counts of sexual assault.

This came after three days of testimony, including first-hand accounts from the girl herself, who has developmental disabilities; and girl’s mother, who woke up in the bed when and where the act occurred.

“It –well I wouldn’t say the worst thing, but I think universally that trial attorneys are not big fans of hung juries.”

Hofmeister says he originally thought this case would have garnered four guilty or four not-guilty charges because of the first-hand testimony, but the jury may have come to this conclusion because of uncertainties in the DNA evidence.

“The way that the case was argued, it seemed like it was an all-or-nothing proposition in terms of all the counts, but clearly they were swayed by, I’m guessing, some of the physical evidence.”

Defense attorney Marcelle McDannel says that she thought the jury did well, and commended them on spending time to think the whole case through.

“I have no criticism of the jury and I really think they were very careful and honestly they spent a lot of time on it and I appreciate their willingness to do that.”

The jury deliberated about 10 hours over two days.

With the given charges, Mason could face a life sentence, and likely will be transferred soon out of the Ketchikan jail to a larger facility. The sentencing hearing is set for Nov. 13, at the Ketchikan courthouse.