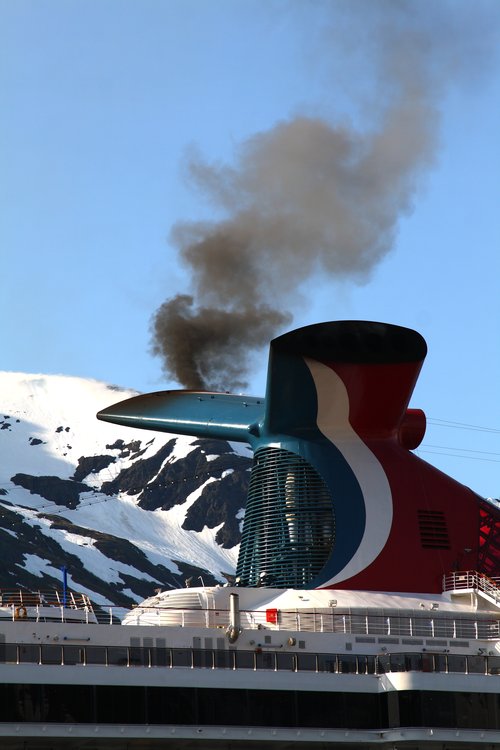 Smoke pours out of the smokestack of the Carnival Spirit cruise ship as it fires up its engines. Carnival is one of seven lines allegedly violating pollution rules. But exceptions are made for engine startups. (Courtesy Ground Truth Trekking)

Environmental Program Specialist Jason Olds says they were measured in Ketchikan, Juneau, Haines, Skagway and Anchorage. Others were spotted while sailing between ports.

He says government or contract monitors measured the density of ship smoke. They’re part of the department’s Cruise Ship Program.

“The layman’s explanation is that we look at the contrasting background and how much of that is obscured by the plume,” he says.

Details of the notices are not yet public because the alleged violations and penalties are being negotiated with cruise lines. Olds says they could be resolved within six months, though it could take longer.

He says the penalty for a current violation is $37,500 per incident. Earlier violations could cost less, since the amount is linked to inflation.

Olds says violations were issued to almost all of the major cruise lines serving Alaska.

“All the ships are equipped with opacity monitors that actually measure the opacity as the smoke comes out of the stack,” says John Binkley, who heads up Alaska’s chapter of the Cruise Lines International Association.

He says the ships self-report when their monitors detect excessive emissions. But sometimes, that equipment comes up with different measurements than human observers.

“And so, that’s one thing they may be discussing in these alleged violations is, which do you give more weight to: The actual instrumentation or the person’s interpretation of what the smoke looks like?” he says. A Celebrity Cruise Line ship sails into Juneau in 2012 with emissions coming out of its stack. Celebrity is one of seven lines alleged to have exceeding emissions limits. (Ed Schoenfeld/CoastAlaska News)

A number of cruise lines have installed or are in the process of installing stronger pollution-control equipment called scrubbers. They mostly target sulfur emissions, but also remove particulates that reduce opacity.

In addition to cruise ships, the ferry Columbia was found in violation while it was in Auke Bay, home to Juneau’s ferry terminal.

“The department worked with DEC, tested the quality of the air coming out of the exhaust stacks and sure enough, it wasn’t in compliance,” he says.

Further adjustments were made and the Columbia met emission standards. Olds says his department took no further action.