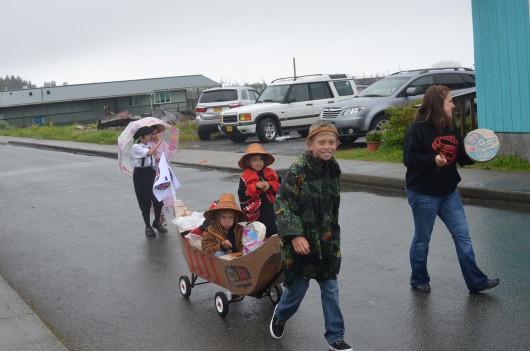 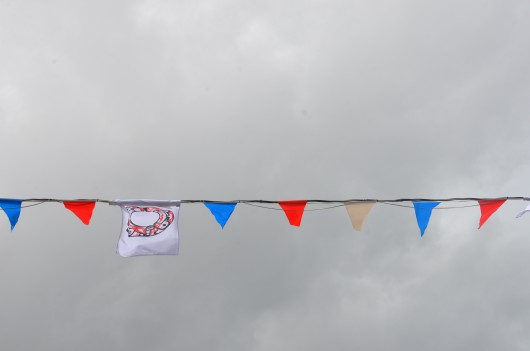 Banners wave in Metlakatla in celebration for Founder’s Day of August 7th, 2015.

On Friday the 7th of August, neighbors, family, friends and visitors gathered in Metlakatla to celebrate its founding in 1887 as a United States reserve. The holiday is a major event for the town, but hasn’t always been.

An appropriate greeting on Founder’s Day is “happy Seventh,” much like how on Independence Day people say “happy Fourth.”  Celebrated in the summer, both festivities include parades and fireworks, and are held in the same location. So it is easy for John Fawcett to compare.

“ It used to be a little smaller than the Fourth of July celebration.” Now, it’s bigger, Fawcett said, sitting with his wife, Barbara, at Russell Hayward Memorial Park in Metlakatla. 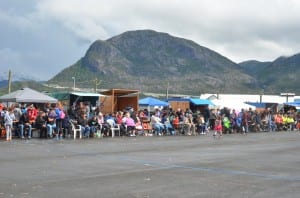 The park where the couple are sharing an ice cream sundae and watching three-legged races is about a 100 feet from where Father William Duncan and U.S. officials first raised the United States flag on the island 128 years ago.

John and Barbara don’t move when the 35-and-over age bracket is announced for the races. They’re saving themselves for the jitterbug competition. “We’ll look and see who’s doing it, and if we can compete we’ll try it.”

The couple has been dancing the jitterbug since the ‘50s when it was first popular, and have won a few times since the competition became a Founder’s Day tradition. Back when Founder’s Day was smaller than the Fourth of July. 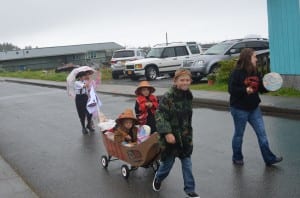 Children dress as founders for the Founder’s Day parade.

John said it was a different kind of dancing that helped grow Founder’s Day.“It’s become bigger because of all the dance that represent our four clans: Raven, Eagle, Killer Whale and the Wolf clans.”

John said Native dance, part of a larger cultural revival, has given a greater significance to Founder’s Day.

About the time Barbara was dancing in the first Tsimshian group on the island, Jack Hudson arrived to teach Native arts at the high school.

“Well they didn’t have any when I came here. In 1975, there wasn’t anything happening here, and now there’s a lot of art here. I taught a lot of kids I’m not saying I did everything. At least I taught them what it was all about.”

He said often people blame Father Duncan, the Christian missionary who founded Metlakatla, for getting rid of Native art. “He told them not to do it on account of they were just wasting their time. He wasn’t against the art. He even had carved poles in his church.”

Still it was lost. But it’s coming back.All four clans were represented during the morning parade. Among the vendors selling plastic swords, there are t-shirts that say raven dancer along with traditional cedar hats. 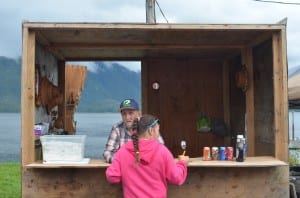 John remembers a time you wouldn’t see that. “It’s coming back like all the cedar baskets, they’re coming back. All the things that our grandparents had to give up at that time.”

The revival of Native culture means there is more to celebrate on the 7th of August.

“Because it’s our Founder’s Day. It belongs to us.”