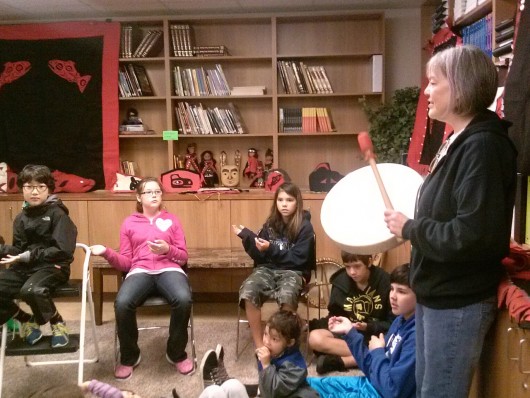 On the third day of the camp, a group of about 25 kids were taught how to can fish properly to avoid a bacteria that most kids hadn’t heard of: botulism.

“You can’t taste it, you can’t smell it. It can damage your insides,” and instructor tells the kids. “Does anybody have a story that they’ve heard of a loved one that might have passed away from botulism? I know I’ve got them. Yeah, so we have to be really careful.”

They went outside and were shown how to fillet a salmon, and pack it into a jar before loading it into the pressure cooker. 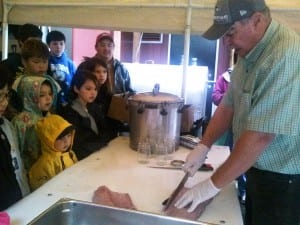 “This is my personal choice for doing fillets. So you just take your knife and get a feel like it’s up against the backbone. And you feel it going through the rib bones,” the instructor said.

Meanwhile, another group was inside crafting headbands, cedar bark bracelets, and transformation masks.

A young boy explained what transformation masks are: “It’s like showing an animal turning into a man, like the spirits.”

Still others made their own puppet-like figures to go along with the story of the fog woman. Here’s part of that story, told by one of the instructors: “As time went by, the raven forgot the chief’s warning. The raven says, ‘I am angry with you wife.’ And the wife says, ‘I don’t like it when you talk to me like that. Remember, my father made you promise to be nice to me.’ But the raven says, ‘Don’t talk to me like that,’ and he whacks his wife with a piece of salmon.”

In groups, the kids sang Native songs and listened to the stories behind them. Well, some of the kids sang, while others curled up to their older siblings or friends and simply listened.

“Any favorite parts?” I asked.

“Listening to stories,” a boy answered.

“What’s your favorite story so far?”

Starla Agoney is helping with culture week, and says she thinks it’s an important tool for Native and non-Native kids alike as they grow up in this community.

“I think the mission is to have pride in who they are and to connect with other children their ages and they just get to know each other and even get to know adults that they can trust and can come to when they need to,” she said. “I think they get a lot out of learning about their culture and the culture around them.”