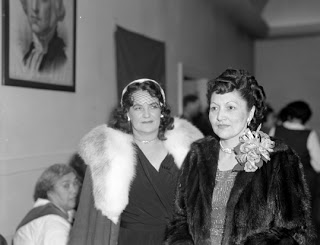 The Walker-Mallott administration has nominated Tlingit civil-rights leader Elizabeth Wanamaker Peratrovich to be on the new $10 bill.

The U.S. Treasury is collecting nominations of women who were champions for democracy to put on the redesigned note. The governor and lieutenant governor say Peratrovich fits the description well.

“Elizabeth was the driving force for the civil rights movement in Alaska. And she played an instrumental role in Alaska becoming the first organized government in the United States to end legal discrimination,” she says. “That was almost 20 years before the passage of the [U.S.] Civil Rights Act in 1964.”

She’s most famous for her 1945 speech to Alaska’s Territorial Senate during debate on a bill to prohibit racial discrimination. The Anti-Discrimination Act passed.

She responded to a lawmaker who referred to Natives as uneducated “savages.” The speech was recreated in a documentary video by Mara Sheakley-Early:

“I would not have expected that I, who am barely out of savagery, would have to remind gentlemen with 5,000 years of recorded civilization behind them of our Bill of Rights.”

The administration nominated Peratrovich in letters to the secretary of the treasury dated Thursday.

She was born in Petersburg in 1911 and grew up there and in Ketchikan. She and her husband Roy lived in Juneau and traveled the state promoting civil rights and the Alaska Native Sisterhood and Brotherhood. She died in 1958.