Ketchikan’s old Main Street fire station has been unoccupied for going on four years — ever since a larger, brand-new station with all the modern perks went up in another part of downtown.

Built in 1943, the building had outlived its use as a fire hall. Now, though, a local nonprofit wants to re-purpose the historic building into a creative space for artists.

“This is the lower level, and you can see, the whole space is almost 8,000 square feet,” said Kathleen Light, director of the Ketchikan Area Arts and Humanities Council.

She’s taking me on a tour of the city-owned Main Street fire station, which has 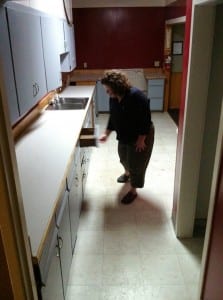 been empty since 2011. Well, empty of people. It’s been used as storage ever since the fire department moved into its new digs a few blocks away.

The old fire hall wasn’t big enough for modern firefighting rigs. It is still big, though, with three bays opening directly onto the street. Light said that large garage space on the main floor is perfect for art studios.

“The floor is sort of indestructible, it’s concrete, so they can be messy and not hurt anything,” she said. “We also think we need to preserve a very large space for large work.”

That’s the concept for the big, open garage space. But wait! There’s more.

“As you move towards the back, there’s lots of space behind where the trucks were,” she said. “So there’s even more storage locker space for artists. This is where the pole was – the fireman pole.” 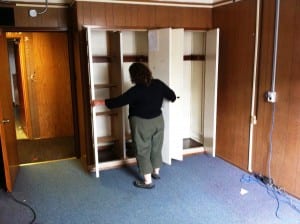 Kathleen Light looks into a closet in one of the Main Street fire hall’s upstairs bedrooms.

Would they put it back?

And, there’s even a basement – something of a rarity in Ketchikan.

“There’s space down there – we can go down there,” she said, leading the way. “There’s more work space down here, and I believe this is where the firemen had their lockers, so even more space. And there’s a little bit of water seepage, but we’re right on the rock, so none of that is surprising or unusual.”

Upstairs is where the “residency” part of the plan would be realized. The second floor already is laid out with four bedrooms, a communal bathroom, a kitchen and meeting rooms that the fire department used for training.

“This is where artists would come to stay,” Light said. “So, if they’re visiting from outside of our community, they would stay in these spaces, work downstairs in studios, learn from the master artists.”

The space isn’t move-in ready, though. There would be a lot of work involved, especially since the Arts Council wants to restore the building, which had been renovated at one point.

“They dropped the ceiling from the original ceiling; they put in a couple extra 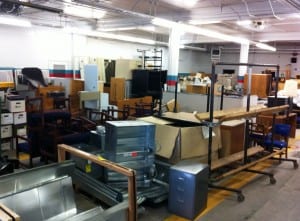 The garage space at the Main Street fire hall is full of outdated city-owned equipment, mostly from the old library building.

walls,” Light said. “We’d get it back to its original layout, which would provide more room.”

On top of that, the building needs a new roof, and the oil-fired boilers in the basement need replacement.

All that is going to cost a lot, which is why the Arts Council doesn’t want to take over ownership quite yet. In its proposal to the City of Ketchikan, the Arts Council asks for a “partnership.”

The first step in that partnership would be an assessment, which the Arts Council wants to city to help fund.

“It’s about a $10,000 expense to get a full condition survey,” she said. “That would tell us what kind of asbestos is in the building, what kind of roof repairs we need immediately, and if our mechanicals is good and the electrical is good. Those are the things we don’t know.”

That means they don’t know how much the whole project might cost. The assessment would give them that vital information.

“If we determine that we can’t afford it, then we stop there,” Light said.

But, if it seems doable, they’ll ask the city to transfer ownership to the Arts Council for at least three years, but still pay for electricity and heat during that time.

At the end of those three years, if it doesn’t work out, the Arts Council would give the building – plus any improvements – back to the city.

But if it does work, then the transfer would become permanent, and the Arts Council would take over all expenses.

The Ketchikan City Council talked briefly about the request during its Aug. 6th meeting, and members didn’t seem that keen on the proposal.

Here’s Council Member Judy Zenge: “I’ve had a lot of people approach me about the fire hall and (ask) what the city is going to do with it, are they ever going to put it up for sale. I’d like to know what it’s worth. Another thing I have a little bit of heartburn on is paying the utilities for three years. I’d like to see a better plan for that.”

The motion to consider the Arts Council proposal was postponed, to give city management time to look up more details, which they did.

According to city information, the fire hall was assessed in 2008 at about $445,000, not including the land – valued at about $315,000. But, that doesn’t take into account the repairs needed to bring it up to code, such as cracks in the concrete, seismic upgrades, a new roof, and potential rot in the roof beams.

Heat and electricity for the fire hall cost about $20,000 in 2011, when the building last was occupied. Unoccupied, those utilities cost the city about $13,000 last year.

And then there’s all the stuff that the city is storing in there. They’d have to find somewhere else to put it.

One issue that’s driving the timeline of the Arts Council’s proposal is a planned expansion of the carving shed in Saxman this winter. That expansion is sorely needed, but after construction starts this fall, the carvers will need somewhere to work.

Light said the old fire hall is perfect for the carvers, and the community as a whole has an interest in providing them a space to work.

So, even if Ketchikan City Council members don’t want to accept the whole Arts Council proposal, Light hopes they’ll at least let the carvers move in to the fire station for the winter.