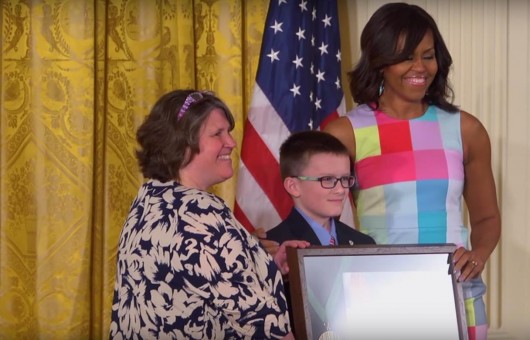 Amy Marshall and Colin Rice accepting the National Medal for Museum and Library Service from Michelle Obama in May of 2015.

Amy Marshall became Director of the Craig Public Library on the library’s 75th birthday, exactly five years ago Friday.  This year’s library birthday party will also be a celebration of winning a national medal and Marshall’s going away party.

A few months ago  Marshall was in the East Room of the White House accepting the National Medal for Museum and Library Service from Michelle Obama.

“If you had told me in December of 2009 that I would come to Craig to run a library and end up at the White House I would have thought you were crazy, but it happened.”

She’s leaving Alaska for the same reason she came: her husband’s work in the Forest Service . She hadn’t planned to work at the library, but about after a year living in Craig writing and volunteering,  the position opened up, and she applied.

On her resume, among other experiences, was running the Harbor Defense museum in Brooklyn, NY. She says there are a lot of similarities between museums and libraries, but a lot of differences between Brooklyn and Craig.

Although the 1,200-square-foot library on top of a hill doesn’t have much space, Marshall says she wanted to make it an anchor in the community: a place to learn. Marshall said she is proudest of the kids’ programming she helped create, including the Monday science camp, now in its third year.

Another Monday, kids were dissecting squids. “My job is find the resources to make the things happen that the community wants to happen.”

Marshall credits the Craig community for the library’s national award, and says Craig is a community that values its library. She noticed a turning point a few years ago during an unusually cold winter, when the library got a new carpet.

“We tore up the carpet that was in here, sanded the floors and the carpet was laid and then I had volunteers who came in and put the shelving back together and put the books back on the shelves, and at that moment, I believe that this became the community’s library, because everybody had buy in as to what the space was. ”

Marshall said she is thinking of her departure as a “see you later,” not a “goodbye.” Still, she is sad to go.

“She was just the sweetest lady, and when I was 13 , for the summer reading program, she asked if I would come in and bring my guitar and sing with the kids. So every week on a Wednesday afternoon I would walk two miles from my house to the library with my guitar slung over my back and I would sing with the little kids. And it made a difference to me.”

She already knows she will be volunteering at her new local library, and has been thinking of pursuing her Masters in Library Sciences.

She hopes to be back in Craig soon, and hasn’t given up on her vision to build a new library there, because, she says, Craig deserves it.