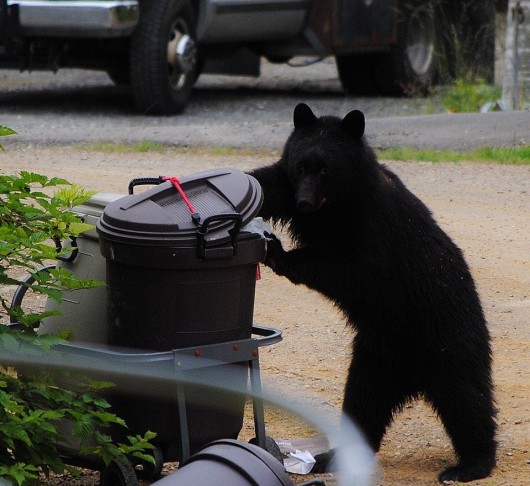 One of the many bears to have figured out the nuances of the bungee cord. (Photo by Rita Leighton)

Local garbage bandits have been making their bi-yearly rounds in Ketchikan, leaving messes in their wake. KRBD looked into how residents are and should be warding off these hungry bears.

More than a few Ketchikan residents have woken to the sound of garbage can lid banging, a can tipping over, quite aware that it’s probably a bear looking for a free meal.

“We moved in in the winter, so we really had no clue. And then the first summer hit, and it just got bad.”

That’s Jenn Tucker. She lives near the landfill in an area she affectionately calls “dump hill.” She says she has been plagued by bears nearly every night of every summer.

“And we’ve been here seven years now. It would be almost every two hours and the bears would be back.”

She says one night she had a bear pushing his nose against the screen door of her house, and she zapped it with an electrified fly swatter. Even that didn’t keep the bear away.

“And then later that night he broke into my car and ripped out my seat, and took a nap in the back seat. And I don’t think he was after food, because there was a peanut butter and jelly sandwich he didn’t eat. 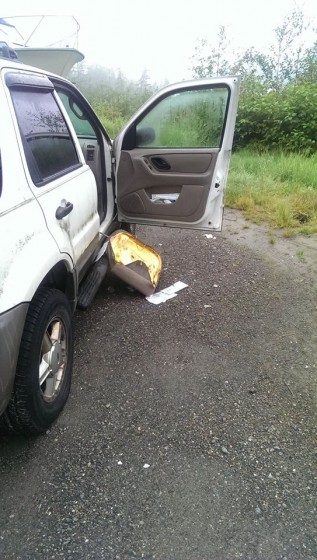 Jen Tucker’s vehicle after a bear broke in on Aug. 5th. She says he likely got in through the unlocked passenger door. She now locks her doors while at home. (Photo courtesy of Jenn Tucker)

She says she’s given up on fortifying her garbage cans, and taken up another method.

“We’ve built an enclosure, he ripped that apart. We used to use chains and straps on the trash can, and he actually literally ripped a lid in half. And so we’ve kind of given up. This year we just go to the dump every day.”

Ketchikan’s Solid Waste Superintendent Lenny Neeley says that Tucker’s case is unusual, and he has only ever seen one bear-destroyed garbage lid. He says the best bet is to buy a ratchet strap.

“It’d keep the lid tightly sealed, and it minimizes odors or materials from falling out. I mean, I’ve seen them flip the cans over, jump up and down, and they’re like ‘Enough of this,’ and they just head on down the street.”

Neeley says putting stinky meat or fish garbage in the freezer until garbage day is best, better even than having an expensive bear-proof can. He says big bears can dent the lids on many of those so-called bear-proof containers and render them useless.

However, he says that using only bungee cords and ropes won’t cut it because they are often easy for a bear to stretch open a little bit, and once a bear gets a whiff of that garbage, they’ll go for it.

Alaska Department of Fish and Game Biologist Boyd Porter says that the first taste is what leads to problem bears. Oftentimes, he says it’s bad for the bears in the end.

“Once people train them, then a lot of times, either myself, the Alaska State Troopers or the Ketchikan Police Department will have to go in and kill the bear.”

Porter says they’ve killed as many as 15 bears during a particularly bad year. He says there are about 30 bears around the Ketchikan area this year, and he really doesn’t want to kill any of them. He says if garbage cans are secure, with either ratchet straps or an enclosure, a bear might look around, but won’t stick around.

Ketchikan Police Chief Alan Bengaard says it’s the bears that start standing their ground that must be shot.

“After a period of time, they get so familiar with being around humans that they don’t back down and they stand their ground on territory, and they’re becoming a danger.”

Bengaard says there’s usually only one or two bears a year in the city that need to be killed, but police end up chasing off a lot of bears with rubber bullets and even Tasers.

He says there is one bear in town right now hanging around 3rd Ave. that is becoming a problem.

“I actually ran into one of the bears that we’ve been having an issue with. And he’s a big bear. I mean, he’s probably upper 300 pound range.”

“Just walking down the street?”

“Yeah, in broad daylight. So he’s pretty comfortable around people.”

Bengaard says the law states that garbage is supposed to be put out no earlier than 4 a.m the day of garbage pick-up. He says they have some leniency with that, but that they’re serious about people who don’t secure those garbage cans. Citations are $200 each. So far this year, he says he’s only given out warnings, but also says this is one of the busiest times, and is getting busier.

Jenn Tucker says she knows bears will be around foraging every night for at least a few more weeks, but she says she doesn’t mind too much.

“It’s worth it. I mean, look where I get to live. I don’t know, other places have raccoons, rats, but we have bears. Our rodents are just bigger.”

For more information on building garbage enclosures or how best to secure your garbage, visit the Ketchikan Wildlife Conservation office at 2030 Sea Level Dr. in Suite 211. To report a problem bear on your property, you can contact the Ketchikan police department at (907) 225-6631.