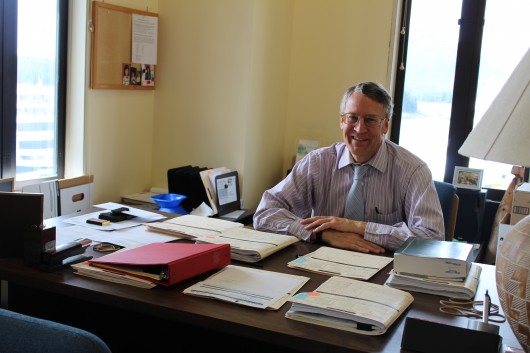 Ketchikan District Attorney Stephen West sits behind his desk loaded with case files on the third floor of the Ketchikan Courthouse.

The Alaska Legislature has cut funding for every branch of state government, including the Department of Law, which oversees District Attorney offices throughout the state. This means Ketchikan’s D.A.s are taking on a larger workload as they wait to have a vacant position filled.

One of Ketchikan’s District Attorneys, Joseph Kovac, left Ketchikan’s state prosecuting team at the end of June. His position remains unfilled while the state grapples with a huge budget deficit. This means a 50% increase in workload for each of the two remaining attorneys in the office.

That’s District Attorney Stephen West. He’s worked in Ketchikan’s D.A. office for nearly 30 years, and he says most of that time, they’ve had three attorney positions to cover the area, which includes four separate courts. West says he isn’t sure if or when they’ll get that third person back.

West says they’ve worked with only two people before, but when that happened, West said they’d had a lighter case load. Another time, West says they were down to only one person.

“There was a period of time that I was here all by myself around 1990 for probably about eight or nine months … I worked weekends and stuff.”

Now with two people, West says he takes cases out of Craig, assistant D.A. Ben Hoffmeister takes all the misdemeanors, and they split the felonies. Even then, scheduling gets messy.

“Ben was in trial earlier this month doing a felony case that lasted most of the week. I had to do a misdemeanor trial, so we were both in trial but we also had to cover courts and a couple of other courts, so we had to be in two or three places at the same time.”

This increased workload doesn’t just mean more hours. It means more cases are settled out of court that could have been either taken to trial or prosecuted for more jail time or higher fines.

Alaska Department of Law Criminal Division Director John Skidmore says the problem with settling more cases for less time or for lesser penalties is a fear for public safety.

“Having lived in many communities throughout Alaska and been a prosecutor in those communities, I’ve always wanted to make the community a better or safer place. For those reasons it’s very difficult to turn down or walk away from a case that you think is righteous because you have sufficient evidence to support that this particular person broke the law.”

Skidmore says state funding for the Department of Law has steadily declined over the last few years, and took a significant cut of 11% after the last legislative session. That department directly funds the D.A.’s office and their personnel. With about 85% of the office’s budget going toward salaries, the cuts resulted in lost jobs.

Skidmore says Ketchikan didn’t technically lose a job, but it may take longer to fill that vacant position, because that empty spot was budgeted under what is called a “vacancy factor.” This means the Legislature and Law Department expected someone to be leaving, and allocated less money for salaries because of that.

“The position down in Ketchikan is not a position that was deleted from the budget. It is a position that is currently vacant due to vacancy factor. Do I anticipate on filling that position? The answer is yes. Can I tell you the exact timing of that as of today? No, I cannot.”