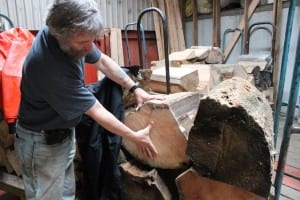 Brent Cole measures a piece of newly harvested wood by hand in his new shop at Alaska Specialty Woods in Craig.

Materials for musical instruments have some unique qualities, especially wood instruments. People seek out specific densities, appearances and types. KRBD sent a reporter to a shop in Craig trying to meet all of those specifications for instruments around the world.

Wooden instruments, from violins to guitars, have a special quality.

That quality comes not only from the musician’s talent, like North Carolina singer Austin Simmons here, but from the wood itself. 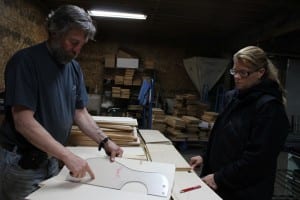 Brent Cole and wife Annette Cole look over a sorting table where they mark the size, grade and quality of wood slabs.

“This is the one. This is the board for the sound…(Sounds of tapping on wood)…it just rings.”

This is Brent Cole. He’s the founder and president of Alaska Specialty Woods in Craig, where he takes dead trees and brings them back to life as sound boards.

“Our motto is woods for the world’s music in harmony with the land. And that’s what we do.”

Cole creates these boards for instruments ranging from the electric guitar to the violin, the double-bass to the flute, and he sends them around the world.

Cole wasn’t brought up in the music business, and says he doesn’t play himself, but he knows all the nuances of the boards used to make instruments, large and small.

“This one here has got this pitch pocket there… And it’s got this other gizmo over here, so it will be not too much that’s going to work for here. That one’s not going to work there… But otherwise, it’s a really nice board.” 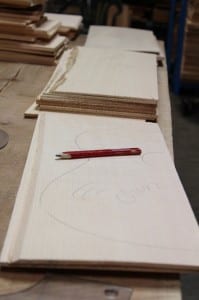 “I use moon spruce from Switzerland, I use red spruce from here, actually, like in Tennessee, I’ve got a guy I get it from. But gosh, I’ve made more guitars out of the Spruce of Alaska than any, really.”

Burchette is a luthier, or guitar-maker, who uses Alaska Specialty Woods products to construct pieces for performers like Zac Brown of Zac Brown Band and 2007 Americana Music Song of the Year winner, Darrell Scott.

“The award this year for the best song goes to Darrell Scott for Hank William’s Ghost!” [Applause]

“Wow, this was not supposed to happen…”

Scott attributed this winning song to Burchette and the guitar, itself.

“A friend of mine out in North Carolina, a guitar-maker named Gray Burchette sent me a guitar that he had made for me, a baritone guitar. So I opened up the guitar, it arrived one morning, and I swear that the song was in the guitar.”

Burchette says why he buys from Alaska Specialty Woods and why his clients like his guitars so much is because of the special patterns in wood Cole finds for him.

“So yeah, anything strange he gets like that or whatever, I try to snag some of it. Because I don’t build a lot of guitars, but the ones I build are custom and they’re special and they’re more of a specialty-type thing so I try to get special wood for it.” 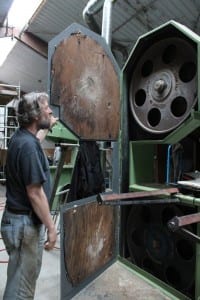 Brent Cole looks into one of his four massive band saws at his new shop.

Cole picks specific trees individually, either dead for a long time, or recently uprooted by the wind. He says there is enough dead and dying spruce trees nearby to fuel his family business, which includes his two sons, his wife and his brother. Cole says he’d like to keep that tradition going.

Even one of his son’s girlfriends is helping create a sign for Cole’s new shop. This new work space is a re-purposed warehouse and is undergoing extensive modifications, but Cole says it’s nearly complete and much better than the small tarp-covered shack where the business began. 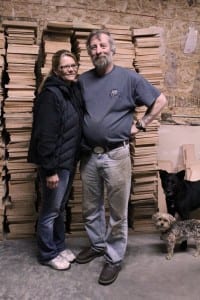 Annette and Brent Cole stand in front of stacks of unsorted wood pieces as two of their many shop dogs look on.

Cole says his family will likely continue living on Prince of Wales in as sustainable a way as they can, even as they send their boards far and wide to places as diverse as the instruments they make.

Special thanks to Austin Simmons, heard performing his song “Tennessee Memories” at the beginning and end of this story. To hear more of Simmons’ song click here. To see more of Burchette’s work, or see some of Brent Cole’s sound boards, please click here or here.