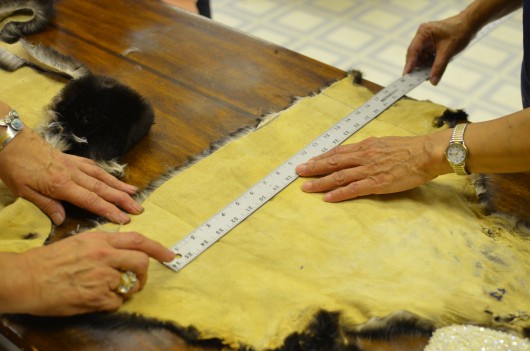 During a sea otter sewing class students measure and cut pieces of hide.

Sea otters have the thickest fur of any mammal, which makes it a valuable commodity. But there are strict regulations surrounding how to market that fur. Coastal Alaska Natives have the right to sell just the pelts, but only to each other. Non-Natives cannot legally buy pelts, but they can purchase sea otter handicraft. On a recent rainy evening in Hydaburg, local Natives gathered for a sea otter sewing class to expand their marketing potential.

Spread on a table are a few dark brown soft pelts: 10,000 hairs per square-inch. The sea otter furs are worth around $250 each, but each pelt can be made into several small pillows, which sell for around $300 each.  Student Anna Frisby stands over a pelt with a metal ruler and an X-Acto knife while others look on.

“Don’t be scared Anne . See it’s not cutting through, just tiny bits. You have to hold it down really hard. Push down hard Anne. Push it hard. “

The students encouraged each other, because the teacher was absent due to personal reasons. For most of the dozen students it was their first time handling sea otter fur, including Stacey Skan, who Frisby convinced to go. “I was a nervous wreck coming the first time to this class. I was like oh my gosh. I don’t even know. I haven’t sewn anything in a long time.” 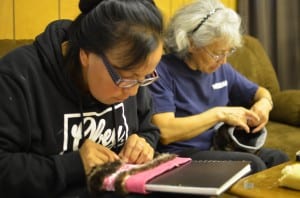 But on the second day of a three-day class, Skan relaxed on a couch in the Tribal Community Center smiling and stitching.

The class is a collaboration between several  non-profits. Southeast Alaska Regional Health Consortium’s Traditional Foods program donated the pelts. The Hydaburg Cooperative Association donated the space, and Lisa Lang from Xaadas Kil Kuyaas put all the pieces together to organize the event.

“Cottage industry. That’s what it’s about. What’s local and bringing it so that you create your own economy.”

She said almost everyone in Hydaburg is an artist, pointing out a carver and a weaver, and she wants to create an artist’s economy. For Lang, an economy means more than money.

“There is over 200 Native villages in Alaska and there’s no economies and so people are leaving and they’re losing their culture, their language. They’re losing everything and they want to be at home.”

The first night of the class, students added trims of sea otter fur to knit hats and headbands as a donation to a newly formed artist co-op. The second night was for making products of their choice.

“ What are you going to make sis did you decide?” “I don’t know I can’t decide if it’s going to be a hat or a scarf.”

Cutting and sewing the pelt transforms it into authentic Native handicraft, which can be legally sold to non-Natives. According to  the U.S. Fish & Wildlife Service, authentic Native handicraft products have been significantly altered from their original form and not easily converted back to their natural state.  Basically, superglue won’t do, but it was joked about as some had trouble sewing.

“But how about this part?” “All I’ve been doing is that straight stich. For the top part and then I’m going to cut it.” “See I don’t know how to connect the parts.”

In addition to creating sellable products , the class was an opportunity to learn some Haida language 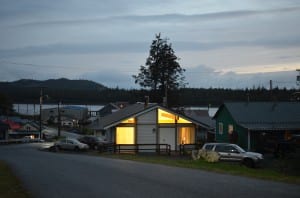 The Hydaburg Tribal community center is lit up for an evening sea otter sewing class.

As well as socialize.

“That’s just the way it is. They frown at you if you don’t talk while you’re working and then they’ll pick on you until you start doing it.”

Skan recently moved from Anchorage to the small village on the south end of Prince of Wales Island. She was anxious at first about the drastic change of pace, but so far hasn’t had trouble keeping busy.

“There’s actually a lot to do. There really is. I was really worried about that. Little things like this I think, it’s really nice. I think it’s kind of the glue that keeps the community going. Honestly.”

There will be another sewing class next month and Lang is gathering equipment and teachers for other classes, such as paddle making, cedar weaving and deer meat preparation.

Lang said with each cedar hat and otter fur bag, Hydaburg is a step closer to the goal of creating a cultural tourism industry.