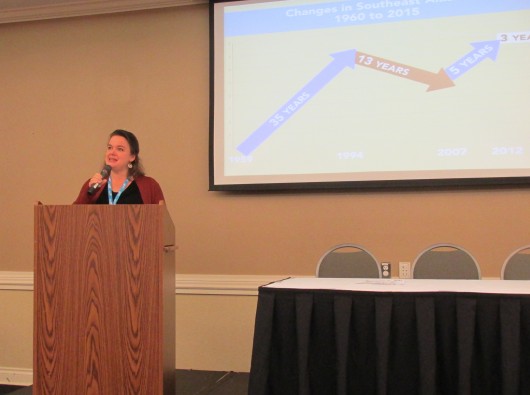 But, that growth all happened in the early part of that five-year period. The past year or two has seen a decrease. That’s bad.

“Our population declined, not by much, by 30 people. Jobs fell by more than 300, there were fewer cruise and ferry visitors to the region last year, the value of the seafood harvest plummeted by more than $100 million, the price of gold fell by 10 percent, and it doesn’t look like these numbers are going to improve, said Meilani Schijvens of Rain Coast Data.

And, the downward trend likely will continue in the near future.

Schijvens presented the annual “Southeast By the Numbers” report on Wednesday, the second day of Southeast Conference’s annual fall meeting.

Schijvens says that while the population of Southeast Alaska has dropped slightly, it’s generally stable at around 74,300 people, but it is changing demographically, with more seniors than elsewhere in the state.

“Those age 65-80 grew by 34 percent in the last 5 years, that’s 2,000 people more in that age range. The average age in Southeast Alaska is just shy of 40, which is five years older than Alaskans as a whole,” she said. ”The average age in Southeast Alaska is older than that of Florida, and we are about to surpass Florida in terms of seniors as a percent of our total population.”

Schijvens says the growing number of seniors is something to consider when thinking about health care access in the region, and all the senior tax exemptions that communities offer.

A large part of her numbers report focused on the different industries in the region, how much they contribute to the economy, and how they are faring. Government jobs remain the largest part of the economy, but they are dropping as the federal and state governments try to cut costs.

The seafood industry is next, and Schijvens says 2014 was down about $100 million from the previous year, but 2013 was an all-time record harvest. She says she found an interesting and surprising fact when researching Southeast’s seafood industry.

Schijvens went through other regional industries: Health care is down, mining is up but the prices are down, and construction is down.

What isn’t down are the visitor industry, retail and, surprisingly, timber. Some large federal timber sales going out for bid and the recent deal giving Sealaska 70,000 acres has given the industry a small boost.

And, Schijvens found another interesting side fact related to timber, and Viking Lumber, a mill on Prince of Wales Island.

“Along with not knowing that Southeast Alaska was the king salmon capital of the world, I also didn’t know that one of the primary uses of our wood in Southeast Alaska is to make pianos. Did everyone know this? Viking lumber is the largest piano stock producer in the United States. Forty thousand pianos a year are made out of Sitka spruce into Steinway, Yamaha and Kawai pianos,” she said.

Schijvens also presented the results of a business climate survey, which includes responses from more than 400 business owners throughout the region. She says the overall responses indicate that business owners anticipate flat growth and continuing challenges with transportation, attracting a well-trained workforce and the simple cost of doing business.

But, she says, Southeast Alaska business owners seem to appreciate where they are.

“Business leaders identified the top benefits of operating a business in Southeast Alaska as our overall quality of life, followed by recreation, culture and the arts,” she said.

Southeast Conference is the official regional economic development organization for Southeast Alaska. It formed in 1958 to facilitate the creation of a marine transportation system in Alaska’s Panhandle, and now has about 180 members.

The fall meeting rotates among member communities, and this year it’s in Prince Rupert, British Columbia.