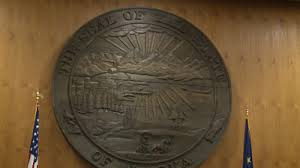 NOTE: This story has been updated to correct an error identifying Dana Fabe as Chief Justice.

Oral arguments were presented today before the Alaska Supreme Court in Anchorage in the ongoing case over education funding.  The lawsuit was initially filed by the Ketchikan Gateway Borough in Superior Court about a year and a half ago and is reaching the final stretch.

The Ketchikan Gateway Borough’s position is that the state mandate requiring boroughs and first-class cities to fund a minimum level for local schools, but not unincorporated areas, is unfair.

The state argues that the required local contribution isn’t state revenue, and that the statute only requires local funding – not necessarily a local property tax.

In January, Superior Court Judge William Carey agreed with the borough, in part. He ruled that municipalities should not be required to pay for public education because the required local contribution is essentially a tax earmarked for a special purpose. He says that violates the Alaska Constitution.

Shortly after Cary’s decision, state attorneys filed an appeal with the Supreme Court. It agreed to take the case, and to put Carey’s ruling on hold until the appeal is decided.

The borough filed a cross appeal asking the Supreme Court to review other points that Carey denied to the borough. That includes whether the borough is entitled to a refund of last year’s required local contribution – about $4.5 million.

Kathryn Vogel argued on behalf of the state. She says Alaska law requires a local contribution for education funding, and it does not violate the constitution’s dedicated funds prohibition.

Justice Daniel Winfree says it’s difficult to make a decision without knowing the parameters of the state’s constitutional obligation to establish and maintain a school system. Another question is whether the constitution allows the state to require local contributions in order to determine if there has been a dedication of funds. Vogel responded.

“The limits of the State’s obligation to place responsibilities on local communities is decided under other provisions of the Constitution.”

“If in fact, or if in law, it turns out that the State is required to fully fund education, then the mechanism that the state uses to require individual boroughs and municipalities to provide some of the funding, that might be a dedicated fund source. If that’s the case, don’t we need to know the answer to the question Justice Winfree asks, ‘Does the state have an obligation to fully fund state education.’”

Vogel says the state is arguing there hasn’t been a challenge until now or a complete briefing on what level of funding obligation the state has.

“That is necessary to finding the required local contribution unconstitutional on the theory that it is somehow state money because it’s funding something that the state ought to be funding.”

She argues there is not enough evidence to change the current funding structure.  She says though the state is required to fund education, that does not mean it has to provide every dollar.

Louisiana Cutler spoke on behalf of the borough.  She says the case is not about how much funding the state has to provide to fulfill its Constitutional duty. And the borough is not arguing that municipalities should not provide some funding. Cutler says it’s about fairness.

“And the argument is that the mechanism that the state has chosen to require a certain amount of funding be sent directly to school districts is unconstitutional under the anti-dedication clause, the appropriation clause and the veto clause.”

Justice Joel Bolger asked whether it matters that the contribution is dedicated, since funding benefits the community where the property taxes are collected. Cutler acknowledges the funds remain in the community, but municipalities have no control over how the money is spent.

Justice Stowers thanked both parties and says the court will issue an opinion at a later time.

Only four of the five justices heard the arguments on Wednesday. Justice Dana Fabe recused herself. Her husband is an attorney at an Anchorage law firm that joined the lawsuit as a friend of the court on the side of the state.

It could be several months before the Supreme Court reaches a decision, but ideally a ruling would be announced prior to the next Legislative session. That way, everyone would know whether or not the state needs a whole new education funding system.