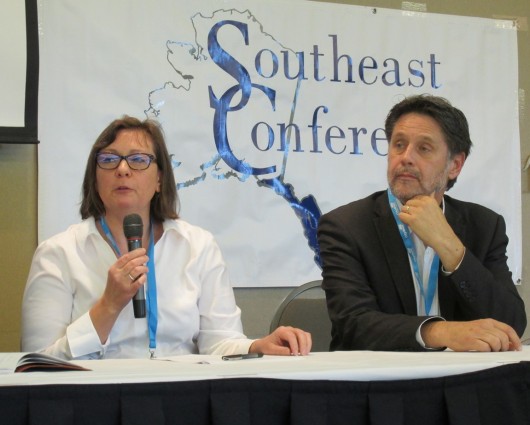 Tessa Gill of Pacific NorthWest LNG talks about a proposed LNG facility near Prince Rupert, British Columbia. Also pictured is Herb Pond, former mayor of Prince Rupert, who works with the BG Group. They were part of a panel discussion during Southeast Conference’s fall meeting in Prince Rupert.

Alaska is continuing to work on plans to construct a multi-billion-dollar liquefied natural gas project, potentially providing another source of revenue for the state.

British Columbia also is working on plans for LNG production, with proposals for the Prince Rupert, BC, area a little further along than the Alaska project.

Both areas have similar challenges, among them a limited workforce due to small populations. Southeast Conference hosted a panel discussion during its annual fall meeting this week about LNG development in Alaska and British Columbia. Industry representatives talked about how they are working with communities to help train a local workforce.

Tessa Gill of Pacific NorthWest LNG said the company wants to be able to hire from the B.C. labor pool as much as possible before looking elsewhere.

“And, one of the programs we created is an individual training sponsorship program, which is aimed at helping local First Nations and community members get the training required to potentially work at our facility, or in the LNG industry in general,” she said. “This program recognizes that each individual’s needs are different, and may require a tailored solution to reducing barriers.”

Pacific NorthWest LNG is working toward a facility near Prince Rupert. It, along with other proposed facilities, including Alaska’s, would target the Asian market.

Herb Pond is the former mayor of Prince Rupert who now works for the BG Group, an international company that works on LNG projects. He said his group also has workforce training programs in anticipation of a growing LNG industry in the region. They offer assistance for adults who have had trouble holding jobs, and Pond said they’re also working with schools to help prepare the next generation.

“Long-term jobs require much more skills: Science, math all that sort of stuff, and so we brought up this woman who’s been working for three years now, it’s a three-year program at the schools, to increase among young school kids, numeracy, literacy, so they can be our science and engineer people,” he said. “We developed a partnership with SFU and the local college here to run science camps and over the course of the year, we’re going to put 2,000 kids through science camps or science experience.”

Larry Persily is the federal coordinator for Alaska’s LNG project, and he said they expect to hire up to 15,000 people during the construction phase of the project. They’d like to hire Alaskans when possible, Persily said, and they have been working with state officials on training programs in anticipation of those needs.

“But, Alaska also has to accept the reality that any kind of local-hire restriction or prohibitions against allowing people to move freely within the country and get jobs is unconstitutional,” he said. “The key is to train Alaskans and hope they get jobs, but accept the fact that just like many of us moved to Alaska, people can move, but if we have skilled workers, they’d rather hire local.”

In a related presentation, Nolan Steiner of AVISTA, which owns Alaska Electric Light and Power in Juneau, talked about the potential of bringing LNG to Southeast Alaska.

Steiner said if it happens, it will start in Juneau. Such a project would require a distribution center where the gas would be delivered via barge; and a system of pipes to send the gas from a central facility to individual homes.

As with other energy projects, the initial start-up cost is the biggest challenge, not only for the utility, but for the homeowners. A telephone survey of people in Juneau, Sitka and Ketchikan indicated high interest, Steiner said, but it would cost property owners an estimated $5,000 to bring gas to their homes.

“We feel informed by the … surveys that we’ve commissioned, but at the end of the day, when someone takes money out of their pocket, even if we help them on bridging the gap over time, it’s still a tough proposition,” he said. “I’m not here to oversell you on the fact that we will bring natural gas to the community, but I do want to give you assurances that we’re going to give it the best possible try. And, personally, I think it’s possible.”

Steiner said AVISTA is still researching the feasibility of establishing a natural gas market in Southeast Alaska, and will move forward if it appears to be a sound investment.

Liquified natural gas is natural gas that has been condensed into a liquid form. Natural gas can be used for heating and cooking, and to generate power.

Southeast Conference is the official regional economic development organization for Southeast Alaska. It has about 180 members. The annual fall meeting rotates among member communities, and this year it was in Prince Rupert, British Columbia. The meeting wrapped up on Thursday.