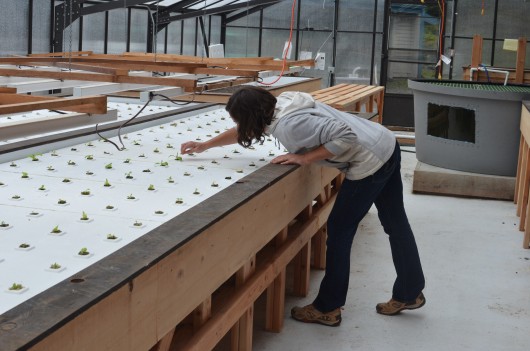 About five years ago, the Southeast Island School District in Thorne Bay put in a wood-fired boiler. A few years after, they built a greenhouse to take advantage of the excess heat.  This summer, the greenhouse transitioned from hydroponics to aquaponics.

A while back, a Thorne Bay father visiting Ketchikan brought back a handful of McDonald’s burgers, which for kids on the remote island is a treat. There was an extra cheeseburger and it was left at the school, where it still is today more than a year later in Megan Fitzpatrick’s classroom.

“We have actually put samples of regular food next to the cheeseburger to show that real food rots and this McDonald’s cheeseburger looks exactly the same as the day it was delivered here.” 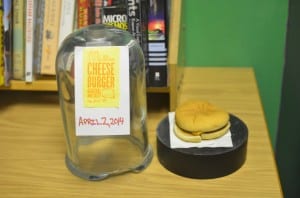 Fitzpatrick said “real food rots” has become a motto, and the “real food”  they used as a comparison was grown about  100 yards away  from her classroom in the school’s greenhouse.

This summer, the greenhouse transitioned from hydro to aquaponics. The difference: fish. Ammonia from goldfish waste is converted to nitrogen and distributed as fertilizer to the plants before it’s recirculated to create a complete ecosystem.

This year’s seven high-school aged greenhouse students will each be assigned some square footage to cultivate, but the curriculum will focus on the concept of an ecosystem.

“What we do is we have different groups of kids each year, or each semester. We find out what their needs are, their interests are and try and tailor it to what they need and what they’re interested in.”

The first year, the class was like a business. Students focused on work skills, such as presentation, cooperation and showing up on time.  The next year, the focus was plant science . Fitzpatrick said it’s always about trying to grow food, just framed differently.

“This is what I look forward to like every day. Coming out seeing what it’s doing. Kids are keeping records. Yesterday, they were doing some water quality analysis and they have to graph it all out. They keep a data sheet.”

Thorne Bay isn’t the only school on the island with a greenhouse. The Southeast Island School District also funded aquaponics greenhouses in Kasaan and Naukati ,and is currently building the flagship greenhouse in Coffman Cove.

To make sure operations got off the ground smoothly, the district hired a greenhouse manager, who also runs a district bakery and now serves as a principal to several schools. Colter Barnes came from western Alaska as a principal who also operated a small organic farm. He said his job is to do right by the district’s investment.

“Here’s doing it right. One is we’re having salad bars every single day at our sites that are from products from our greenhouses. That won’t be hard to do. We’re going to have carrots, radishes, green onions, turnips, beets, lettuces, chards, kales.”

With some school populations at less than 20, Barnes says school greenhouses likely will produce more food than students can eat, and the district is using the excess to teach, too.

The Thorne Bay greenhouse has sold excess lettuce to local fishing lodges, grocery stores and restaurants, including the district’s own Thorne Bay Café. 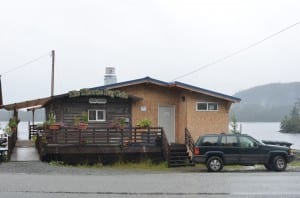 “When the district bought it, obviously it needed to be remodeled. It’s a 15 ft wide trailer.”

Susan Powell  had worked in and owned restaurants for 16 years in Oregon before moving to POW last year to work at the only restaurant in the  500-person town. 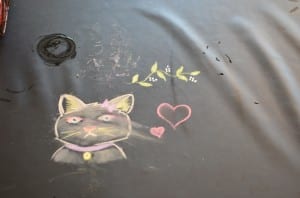 A chalk drawing on a table cloth at the Thorne Bay Cafe.

The maintenance crew for the school district helped make more room in the kitchen and removed a closet to provide a view overlooking the bay.  Flowers from outside hang in the doorway, and each table has a bowl of chalk for patrons to draw on the chalkboard tablecloths.

“People get really creative and sometimes I don’t like wiping it up. I’m like, that’s so beautiful.”

15-year-old Aurora Trulove started working as a waitress at the café shortly after the café reopened. She wipes tables, takes orders, makes salads, wraps silverware and cleans the bathrooms. She’s quick to say being a waitress isn’t her dream job, but she is grateful for the experience.

“There’s not a lot of job opportunities here and like with school it’s very flexible and stuff like that.” For instance, she is also taking a SCUBA class through school, and occasionally it will run late. 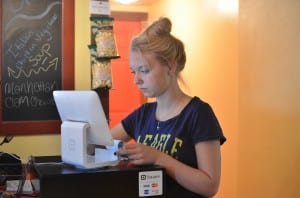 Aurora Trulove rings up an order at the Thorne Bay Cafe.

Powell said she’s flexible because students are the priority. “We will give students income, because they are working for us, and we’ll give them skills. So when they leave the island you can go someplace and say you have work experience and say you know how to do this.”

Powell is working on a state certified culinary arts class for the district to provide a certificate along with experience.

“It’s not just abstract, it’s not in a text book, it’s not in just white walls in classrooms and theory. They get to go out and do something relevant.”

Fitzpatrick said the greenhouse has made a difference in the eating habits not only of students, but also the community. “It was so fresh and so delicious people almost didn’t recognize it as lettuce compared to what we’ve been experiencing.”

Thorne Bay, like many rural Southeast communities, relies on the barge for food, which usually means even at its freshest it is about two weeks old.  Fitzpatrick said community members often stop by during the school day to buy produce and she has to remind them this isn’t just a greenhouse selling food.

“We’re talking English, we are taking math, we’re doing French and Spanish lessons and doing all the other curriculum that kids require. This is just one period a day.”

For the greenhouse going up in Coffman Cove, the plan is to have open doors for the community. Possibly a place to sit, because even besides the food and education opportunities Fitzpatrick says, especially in the winter, being in a warm environment surrounded by plants and fish is good for any age.