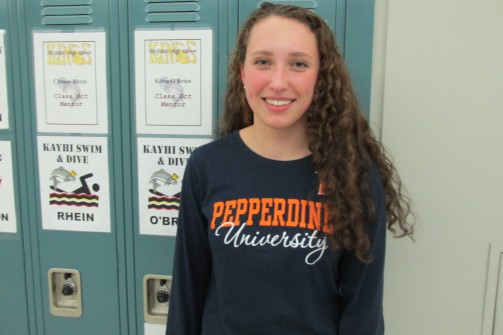 Kiera O’Brien standing next to her locker at Ketchikan High School on September 21, 2015.

This year’s Alaska State Legislature had 17 female representatives and senators. According to the U.S. census, women make up 47.4% of the state population, but in the Legislature. they constituted 28%. Ketchikan High School senior Kiera O’Brien wrote about one of those women for the National Foundation for Women Legislators’ college scholarship, and was one of six winners selected from across the country.

Kiera O’Brien loves swimming. She is the captain of her swim team and was first introduced to the subject of her winning essay two years ago at a state swim meet.

“One of our state senators, Mia Costello, she was inducted to the Alaska swimming hall of fame.” Costello wrote O’Brien’s letter of recommendation for the scholarship and O’Brien wrote about Costello as a role model both in and out of the pool.

O’Brien’s win brought her to Oklahoma City last week, where she met other essay winners from New York, New Jersey, Michigan, Florida and Alabama, and each of the female legislators who sponsored them.

“It was really inspiring. It was really incredible. They’re such influential people and they are really impressive.” There, O’Brien  was presented with a $3,000 scholarship to the college of her choice, and she already has somewhere in mind.

“I hope to attend Pepperdine University next fall.”

Part of what attracted O’Brien to the small liberal arts school in Malibu, California, was the swim team. There she is hoping to study English and pre-law, and eventually practice constitutional law. “Just in general that’s what inspires me I really like the Bill of Rights. I really like studying the Constitution in general.”

She’s preparing for that now, taking a government class and independent study in American History with teacher Susan Stone.  “She’s just a very disciplined young woman. I know swimming is important to her and I think the discipline she applies in that works well with the discipline she applies in the classroom. She’s always interested, engaged, participates in class discussion and she’s also a class officer. “

O’Brien was elected as the Student Body Association secretary. She said while that means she could technically be considered an elected woman, she doesn’t identify as one. “No, not yet. It’s just the senior class.”

This summer, O’Brien attended Girls State, a mock senate, and a month later was elected to Girls Nation in Washington, D.C. She says she really likes politics, and hasn’t yet ruled out one day running for office.