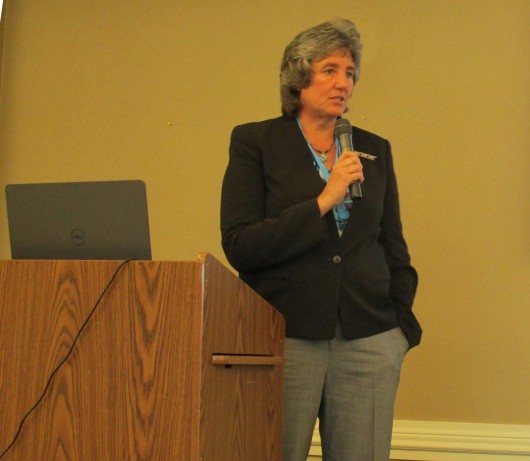 Alaska’s Budget Director Pat Pitney was among the presenters at last week’s Southeast Conference fall meeting, which this year was in Prince Rupert, British Columbia.

A former Olympic gold medalist in Women’s Rifle, Pitney said she expects to be a target — for criticism – as she travels around the state providing information about Alaska’s budget crunch and the options for the state to overcome that crunch.

“It’s not a popular conversation,” she said. “We’ve been good for 30 years on oil revenue, when the income tax was repealed years ago. We’ve had a good ride, and now we’re going to have to move into a new environment. And people are not going to be happy. There’s going to be a lot of arrows, especially coming to the spokesperson.”

Alaska’s budget deficit is in the billions, because low oil prices mean oil tax revenue has dropped. Pitney said the state Legislature cut about $400 million each from the operating and capital budgets during its last session, and still was more than $2 billion short of filling the gap.

Pitney’s presentation is the same one she and Department of Revenue Commissioner Randall Hoffbeck have been giving to various groups all over Alaska. In it, they stress that while more cuts will happen, it’s not possible to balance the budget on cuts alone.

“We’ve continued to cut government, but there’s got to be a point at which we say, there’s a level of service as Alaskans that we want,” she said. “That’s going to be a negotiation: Where is the level of service that we want? What are our priorities as a state? Those are discussions that are ongoing. And do weigh in with your legislators on those choices.”

One of the options for increasing state revenue include hoping for higher oil prices – although that won’t bail the state out unless the price jumps from the current $46 per barrel to $100.

Modifying oil tax credits is another option, and that will happen, Pitney said, because it’s a large budget item – $700 million or more a year.

Using the state’s current assets differently is on the table, too. Included in that option is a cap on the Permanent Fund Dividend – which this year is $2,072 – so the state can use some of the earnings to fund government.

And then there’s taxes: Industry taxes, “sin” taxes, fuel taxes, sales taxes and income taxes. She said Alaskans pay an average of about $500 a year in taxes to the state.

Pitney said a small increase in personal taxes for Alaskans still would keep the state on the low end of the national scale.

She asked for input from some of the Southeast Conference audience members. Myrna Gardner of Tlingit Haida Central Council stood up to say that seasonal workers in Alaska should contribute.

“I was sitting here looking at labor’s research and analysis, their 2013 report. Nonresident workers increased by .29 percent, up to 86,291; their wages went up 5.7 percent to $2.4 billion,” she said. “Eighty-six thousand people take from us and benefit from us. And they, in my personal opinion, should be the first choice of who we tax.”

Pitney said she and other state officials are gathering input like Gardner’s to be considered by the governor’s office for a budget plan to resolve the state’s deficit.

She said Gov. Bill Walker expects to have a draft plan done by next month, with a final plan ready for legislative consideration by November or December.

The state Legislature reconvenes in January, and Pitney said lawmakers should not delay a decision.

“The reality is, the Legislature must act in this legislative session to avoid hitting the cliff,” she said.

The information presented by Pitney to Southeast Conference participants is available on Gov. Walker’s website. It includes a revenue and expenditure model, which allows individuals to see which spending cuts and revenue options can lead to a balanced budget.