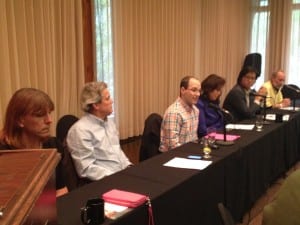 Three other candidates, Gabe Duckworth, James Schenk and Jason Mitchell, were not able to attend.

Along with the rest of the state, the Ketchikan Gateway Borough likely will face budget constraints in the near future. Diminished state oil tax revenue means less money flowing from the state to local governments, so the Borough Assembly will face some decisions about spending priorities.

The candidates overall said the first task is to keep spending low, without cutting so much that it affects quality of life.

New taxes or increased taxes are always unpopular, and the candidates generally opposed changing the current tax system. Hodne added that the borough needs to make sure nobody is sliding on what they should be paying.

“I’m not interested in raising taxes, creating any new taxes until we have, with a fine-tooth comb, gone through our local tax revenue assessments,” he said. “How many taxes have we not collected that need to be collected? How many people are sliding by and not paying their share?”

A caller asked the six candidates their thoughts on allowing commercial marijuana operations in Ketchikan. While voters legalized marijuana last fall, and everyone can use it for personal use now, it remains up to local governments to decide whether to allow marijuana stores within their boundaries.

Most of the candidates said they preferred to wait and see what the state Marijuana Control Board comes up with to regulate commercial cannabis, and what the local Marijuana Advisory Committee recommends for the Ketchikan area.

Bradford said that for him, the question of whether retail cannabis should be allowed has a clear answer.

“I don’t think a single voter went into the voter booth to vote yes thinking, ‘I’m going to vote yes, but I sure hope the marijuana control board or the local government put up as many silly road blocks and impediments that they can think of,’” he said. “I think our regulators need to get out of the way, acknowledge the will of the people, but still craft reasonable rules that protect our community, and then let’s turn it into a benefit. Let’s provide a reasonable tax on the sales of cannabis to make up for some of the shortfalls of the state.”

Another caller asked about consolidation of the borough and city governments. That issue comes up almost every year, and has even made it to a vote of the people five times, but always has failed.

While most of the candidates say they understand the appeal of consolidation, the fact that it’s failed so many times indicates that the public doesn’t want it to happen.

Wong said he’s in favor of streamlining local government, but not as a government initiative.

Another caller asked the candidates’ opinions on the $3 per pack tobacco tax, which was indefinitely tabled by the current Borough Assembly, but could come back.

The candidates were overall opposed to the tax, at least at that level; most said they’d consider a lower excise tax on tobacco products. Pickrell said she doesn’t like new taxes or taxes on specific items, and wouldn’t support it. However:

Another question for the candidates related to the borough’s funding level for education, and whether it’s adequate. Most said it was enough for the needs, but could potentially be increased. Trevor Shaw, who like Bradford is a current School Board member, said local education funding is close to adequate, but he’d like to see about $400,000 more allocated annually.

Also related to education funding is the borough’s lawsuit against the State of Alaska. The Borough Assembly chose to sue the state over the constitutionality of the required local contribution for public education, and won in Superior Court. An appeal to the Alaska Supreme Court is now awaiting a decision.

Shaw said he was skeptical initially but now he leans in favor of the borough’s lawsuit. Bradford said he’s not sure whether the borough will benefit financially in the end, so it may not have been worth the effort. Hodne said he supports the lawsuit, because if the current system isn’t constitutional, it should be fixed. Pickrell agrees that it’s a matter of fairness, and she supports the lawsuit.

Wong said he would have preferred another method short of a lawsuit. Davis, who is the former South Tongass Service Area fire chief, said she attended one of the first staff meetings when the topic came up.

“My first thought was ‘Wow, holy smokes. We’re going to sue the state? But after listening to the manager, Mr. (Dan) Bockhorst, and knowing his reputation with numbers: Right is right and wrong is wrong,” she said. “I was firmly convinced after several staff meetings that it wasn’t fair, that it was unconstitutional.”

You can hear more detailed answers from each of the candidates by listening to the entire forum. It’s posted below.

The local election is October 6.