School Board sends letter to the state

The Ketchikan School Board Wednesday night approved sending a strongly worded to the Alaska Department of Administration.

The letter was written in cooperation with the Ketchikan Borough, and opposes the state assigning pension liability to the district. The extra liability could affect the Borough’s credit record and in turn its ability to buy bonds, according to Superintendent Robert Boyle.

The motion passed in a 4- 2 vote. Board members Trevor Shaw and Stephen Bradford voted no, saying that the letter was premature as discussions at the state and Borough level are ongoing.

Superintendent Boyle explained that the intent of the letter was to register the complaint while at the same time staying in compliance with the law especially for the sake of an ongoing audit.

In other business, the Board struck down a policy regarding married and pregnant students. The policy, which protects access to education for married, pregnant and parenting students, was approved in first reading at the last meeting. Board members, David Timmerman, Stephen Bradford, Trevor Shaw and Glenn Brown voted no. Brown like others thought it was unnecessary. “It really is. There’s federal law all over this and it’s just busywork and I don’t know why we’re doing it.”

Boyle said the district has been and currently operates under the premise of the policy without it actually in place. 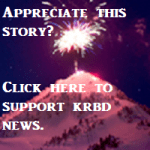 Also Wednesday the Board spent time discussing revisions to graduation requirements. The biggest point of contention was whether to allow students to walk across the stage without receiving a diploma.

Student Representative Cheyenne Matthews supported the revision. “It’s 10 seconds walking across the floor. I don’t think you can really take away the experience for everyone else just by allowing someone to have the opportunity to get their moment instead of waiting a whole year because they missed half a credit of AK studies.”

Glenn Brown and Ralph Beardsworth disagreed saying it cheapens the experience for graduates. “It’s one of those milestones steps, and I feel it shouldn’t be watered down. I think it’s significant and it means a lot. “

The issue will be brought back at the next meeting.

Boyle had some fun with what he first joked was a  light saber. “It may look like one, but what this actually is, it’s a LED fluorescent replacement.” He said while the LED lights cost $20 and florescent lights $2, the LED saves money over time. The maintenance department has been replacing burned out bulbs with LED fixtures and will continue as money allows.

The meeting was the final meeting for Ralph Beardsworth and Stephen Bradford, who have completed their three year terms and are not seeking reelection to the Board. School Board member Conan Steele is running to retain his seat.

The next School Board meeting will be on October 14 and the Board will be seating new members at that time.