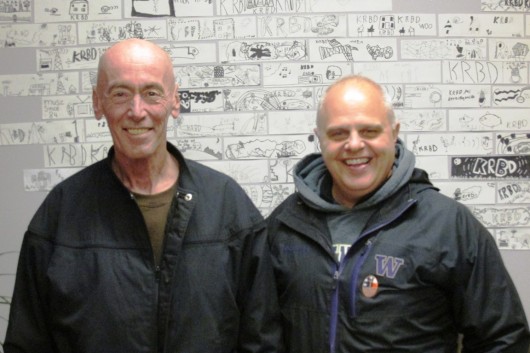 The two candidates running for mayor of the City of Ketchikan attended a live on-air forum Thursday at KRBD. Incumbent Lew Williams III and challenger Ed Plute answered questions about current issues for about an hour.

Ed Plute is a newcomer to politics, but he’s ready to change that.

“I’m not a politician whatsoever, and I’ve never been elected to any office, but I’m at the point in my life where, I have to do something for society and this is one of them,” he said. “And this is about our community, it’s not about me.

Lew Williams III is a longtime elected official. He served many years as a Ketchikan City Council member before becoming mayor. Williams agrees that giving back to the community is important.

“What you put into your community is what you get out and I’ve always encouraged that not only for myself, my employees, my kids, I also encourage the people in the city to get involved with the community, because whatever you get involved with, you can make it better,” he said.

With increasing expenses and shrinking revenue, a big question for all candidates this year is how to balance the budget. Williams said the city’s budget has been cut repeatedly over the past few years, and more cuts now will affect services.

“It’s a tough thing to do. The economy has been flat for five or six years now. The state has

Plute said he believes the city could save money on its water system by stopping the chloramine treatment system that was completed last year. The system was put in place because the city’s former water treatment system created elevated levels of byproducts, in violation of federal regulations.

The new system reduced those levels, but they are still too high and the city is exploring options to reduce the byproducts further.

Plute said a standpipe that would take drinking water from a different depth of the lake would solve the problem.

He also believes the current city manager, Karl Amylon, is the cause of many cost overruns.

“We have several projects that he’s went over $5 or $6 million on each project, knowingly. And this is mismanagement of taxpayer dollars,” Plute said. “If he’s gone, we might be able to control the city again because there’s no reason to pay these kinds of taxes with the tourist industry the way it is.”

Regarding retail marijuana, Plute said he supports allowing it, with limits, and supports a local excise tax on pot. Williams said he’s concerned about allowing edible marijuana products, and wants to know more about the options available to the community. If it is allowed, he said, he also would support taxing cannabis locally.

On the tobacco tax, though, the candidates split. Williams said he’s in favor of some kind of tobacco excise tax, with the proceeds helping to fund local government as well as smoking cessation programs. But, he said, he doesn’t see the city moving forward with a tobacco tax without the borough’s involvement.

Plute had a different take: “I don’t support no new taxes whatsoever.”

He said there are many projects on which the city has overspent, and those should be looked at first.

“If you look through the books – I have, the last several years – and found hundreds of examples of waste of taxpayers’ money,” he said. “And this has got to come to a stop.”

A caller asked the candidates how they would encourage new economic opportunities and growth in Ketchikan.

Williams said that’s an ongoing focus for the Ketchikan City Council. He noted the city’s past and ongoing support for the shipyard, nearby mining exploration, expanding the cruise ship dock downtown, the drive-down ramp for commercial fishermen, the hospital expansion project and keeping utility rates competitive.

“So when the Council’s doing something, we’re always looking at how that’s going to help us economically, at least the time I’ve been on the Council,” he said.

Plute suggested starting a boat museum, but said the main focus should be on reducing wasteful spending.

Another listener submitted a question, asking the candidates what their understanding is of the role of the mayor.

Plute said the mayor’s job is challenging, because “he’s working with a budget run by Karl Amylon, and Karl Amylon actually throws the big shots out there.

“The mayor has to make the decision one way or the other, understanding it’s all tough to do. So, basically, the way they’re working it – instead of blaming the mayor or City Council, you should actually blame Karl Amylon.”

Williams said the mayor represents the community, and works with the public, the Council and city management to help keep things running smoothly.

“This mayor system here in Ketchikan is a weak one, so I’ve got to grab for whatever I can get,” he joked. “One thing I do well is at the meetings,…  I like to work with the Council members, make sure everybody is heard, and try to get a good debate and direction, where we want to go, so we do it efficiently. Everybody gets their input.”

The two mayoral candidates also discussed what to do with the old Main Street fire station, whether to change the city’s water rate structure, consolidation and their top priorities if elected.

You can listen to the entire one-hour candidate forum, posted below.

The local election is Oct. 6.