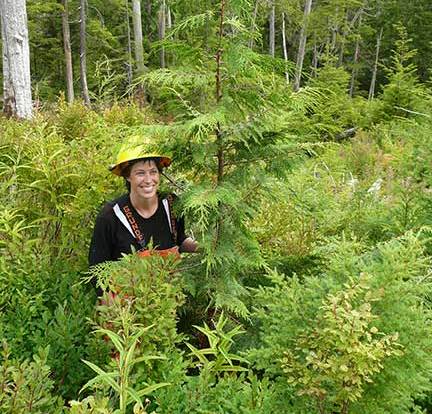 The silviculturist for the Tongass National Forest has been recognized for her service with the prestigious national Silviculture Excellence Award.

I started out asking Sheila Spores how long she’d been working for the Tongass.

“Now we’re getting a little personal,” she said, laughing.

Let’s just say that Spores was very, very, very young when she started work on the Tongass. It was 1992, and she was a student trainee studying forest management.

She had applied for jobs in her home state of Montana, but then, “I had a voice message on my phone that said I had a job offer from the Tongass and, I had no clue where that was. None! And I didn’t even know what silviculture was. I called someone and said, ‘Hey, do you know where this Tongass place is?’ Someone said Alaska and I said, ‘I’ll take it.’”

During that student training, Spores learned what silviculture was, and decided to focus her degree work on that specialty.

So, what is silviculture?

“I get asked that question a lot,” she said. “Silviculture is the branch of forestry that I say is applied ecology. It’s understanding forest ecology so well that, when man is in the mix, you can understand what’s going to happen.”

During timber harvests, for example, Spores considers the life cycle of the forest during the planning process. She also knows about tree diseases, “what insects like which tree species, what kind of natural disturbances that we have and what that will do to the stand through time.”

And what is it that she likes about the job?

“Everything,” she said. “Well, that’s the catch-all answer. I really enjoy my job here because I am quite passionate about the Tongass and forestry in general. But, I really enjoy my coworkers. It’s a great group of silviculturists I’ve worked with for the last many years. They make it fun.”

Spores said she was pleasantly surprised when she learned she had won the Silviculture Excellence Award. It will be presented during a bi-annual silviculturists meeting in Baton Rouge, Louisiana, but Spores won’t be able to attend. She said a coworker will accept the award on her behalf.