Ketchikan student count appears to be up 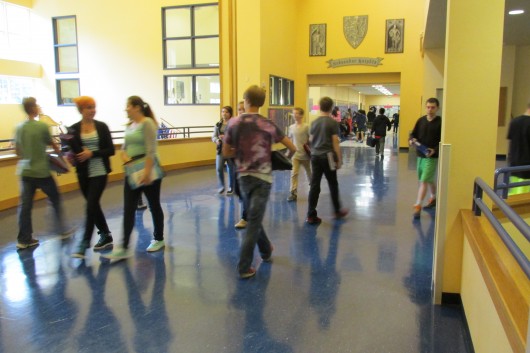 The Ketchikan School District completed its annual 20-day counting period last week, to establish how many students are attending local public schools, and district officials say the numbers are higher than projected.

The official number of students in the Ketchikan School District won’t be known for a couple more months, according to Superintendent Robert Boyle, because the district must hammer out the details with state officials.

The Average Daily Membership, or ADM, is used to determine how much state and local funding the district receives. The state’s funding formula for schools includes a per-student allocation. There are other considerations for state funding, though, such as how many students attend specific schools, and how many special-needs students are in the district.

A preliminary number for this year will be established in November, but Boyle writes in a memo to the School Board that the exact ADM won’t be known until January, and the district still must wait until March for the number to be confirmed. He recently told the Ketchikan Gateway Borough Assembly that it is difficult to plan for spending when the true budget isn’t known until the school year is almost over.

“The numbers are such that, we’re pretty sure what those numbers will be once we’ve closed out and gone through the first round of negotiations, and that’ll be in November,” he said. “The actual final number will not be until March. It’s a challenging process to go through. People talk about forward funding, I’d just like current funding. An actual hard number of what we’re going to get from the state, I won’t know until March.”

The ADM is part of Boyle’s report to the Ketchikan School Board, which meets Wednesday. Another topic in his report is the state’s Alaska Measures of Progress English

The state released preliminary AMP results to districts, but the numbers in those reports aren’t yet final. District Curriculum Director Shannon Sines writes in a memo that state education officials plan to release final state, district and individual school results on Nov. 9.

According to the district summary report, most grade levels in the district exceeded state averages in the AMP language arts test. The only two grades that were below the state average were seven and eight, and those were just by one or two percentage points.

In her report to the School Board, Sines writes that the results, even when final numbers are in, should be considered in perspective, because they are from the first year of a brand-new test.

Sines writes that the results should be considered a baseline for future progress.

The School Board meeting is at 6 p.m. Wednesday in Borough Assembly chambers. Also on the agenda is a public hearing and second vote on a proposed board policy that would allow some students who haven’t met graduation requirements to participate in graduation ceremonies. The issue passed in a split vote during the previous meeting.