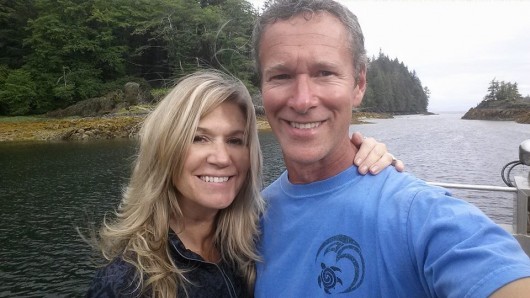 LaDonna and Ole Gundersen take a selfie out on the fishing grounds. (Photo courtesy the Gundersens)

A Southeast Alaska commercial fishing couple is headed to Oman, on the southern Arabian Peninsula. They’re taking about a hundred pounds of frozen wild Alaska salmon with them on a diplomatic trip to share American culture, Alaska seafood and small-business-management techniques.

The Gundersens have been fishing in Southeast Alaska for decades, and they are dedicated to spreading the word about wild Alaska salmon.

That show is how she and Ole Gundersen ended up getting invited for a visit by the U.S. Embassy in Muscat, Oman.

“We received an email asking if I’d be interested in coming over and sharing Alaska culture and fishing and cooking salmon and like that,” she said. “When we first saw the email, we were like, ‘Hmmm. This is curious.’”

LaDonna said she wasn’t sure the email was legitimate, but she wrote back and asked for more details. A month later, they got a reply, and KPU-TV Marketing Manager Michelle O’Brien was cc’d on the email.

Turns out, “her friend, Ann Mason at the U.S. Embassy, they went to college together, I think around 20 years ago, and they kept in contact,” LaDonna said. “And they were looking to promote wild salmon in Oman, so she reached out to Michelle, and Michelle suggested looking at my Celebrity Chef stuff I’ve done.”

So, the Gundersens knew it was legit, and they wrote back to give a resounding “yes!” to 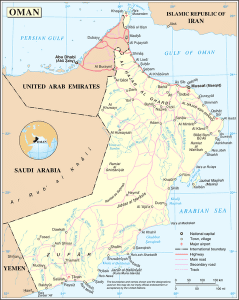 They worked out some details, and learned that the embassy wanted the Gundersens to share not only the joys of wild Alaska salmon, but also the business end of running a small family-owned commercial fishing operation.

“We asked why. Why this? Why would you be focusing on this?” LaDonna said. “Well, over there in Muscat, Oman, it’s a fishing community. Where they have fishing families, small-business fishing community, and they’re very interested in American culture of how we do things.”

Muscat is right off the Gulf of Oman, and Oman is a Muslim country. There are certain cultural protocols that the Gundersens will have to follow.

“I don’t have to cover my hair. Only when I get off the plane, because it’s an international airport and there’s lots of different people there and I would cover my hair so they wouldn’t ask me questions and bother me or bug me,” she said. “I have to be covered all the way to my wrists, and all the way down past my ankles. Can’t show my ankles or wrists.”

Ole can’t wear sleeveless shirts, and must wear long pants, despite the 80-plus degree weather they expect to encounter.

Once they arrive in Oman, the Gundersen’s itinerary is chock full of activities. The first day is a reception with Omani tourism, hospitality and restaurant officials. LaDonna said she did some googling and found out, “Muscat Oman sees 4 million visitors a year – plus! And they have year-round cruise ship traffic.”

The Gundersens also will meet with entrepreneurs and bankers, to talk about the business-end of Alaska salmon fishing; and they’ll host a master-chef class at the National Hospitality Institute.

“The first thing that came to my mind was, ‘Don’t these people understand that I cook on a fishing boat? For Ole?’”

LaDonna said she’s going to teach the class a few different methods for cooking salmon: in parchment paper and foil, seared, grilled, baked, broiled, and anything else they have time for.

Later, she’ll direct a kitchen full of people in the preparation of a gourmet salmon meal at the Grand Hyatt. LaDonna said there will be about 100 guests.

“So, I was thinking that, because there’s so many people that I would bake the salmon,” she said. “Go simple: Olive oil, salt and pepper, maybe a little dill, something like that.”

And, maybe, baked Alaska for dessert.

While most ingredients for these menu items can be found in that Middle Eastern country, one big obstacle was the almost complete absence of wild Alaska salmon in Oman.

“I asked. I said, ‘Do you have wild salmon?’ Because I’m no sell out. I’m not,” she said. “They looked high and low and could not find any  wild salmon at all. They could find an abundance of farmed Norwegian salmon, and it was like, ‘Oh, no.’”

So, they’re bringing it with them.

“We went to Fish from Trish,” a Ketchikan seafood supplier, “And, the go-getter that Trish is, she jumped on the wagon and she goes, ‘I’m in!’ and did everything she can. The fish is all ready. We have them portioned in 6-ounce portions, individually wrapped. We’ll be taking two boxes with us.”

It’s about 100 pounds of frozen salmon, which they hope will not thaw too much during the 20-hour journey. They’re also taking some smoked and canned salmon to serve during various meet-and-greet events.

They’re putting together some slide shows, featuring Ole Gundersen’s photography; and, during the opening reception, they’ll show the video documentary “Ketchikan: A Fish Story,” one of a series of films produced by The Ketchikan Story Project, an award-winning promotional campaign.

They’re also going to take some show-and-tell items: “Our raingear, our boots,” LaDonna said. “We’re going to take a chunk of our net with the leadline and the corkline. We’re looking for an Alaska flag, still.”

During the trip, the Gundersens also get to go fishing.

“First they said that we’ll probably catch ourselves a grouper. It’s a white fish, similar to maybe red snapper or rock cod, but bigger,” LaDonna said. “But then, they told us ay before yesterday that we might catch a big tuna.”

They’ll be busy for most of the trip, but the Gundersens hope to have a little free time to sightsee.

“I guess they have camel races over there,” LaDonna said. “I’d love to see the camel races.”

This is the couple’s first international trip, not counting Canada, and LaDonna said it’s an exciting opportunity.

“To learn about their culture and get to teach them about our culture,” she said. “I’ve been salmon fishing with Ole for 29 years – he’s been fishing for like 35. This is the first time we get actually share it and tell it in a different way that’s not America. I’m excited.”

And, if everything goes well, the Gundersens say it’s possible they’ll be invited in the future to bring Alaska salmon diplomacy to other parts of the globe.