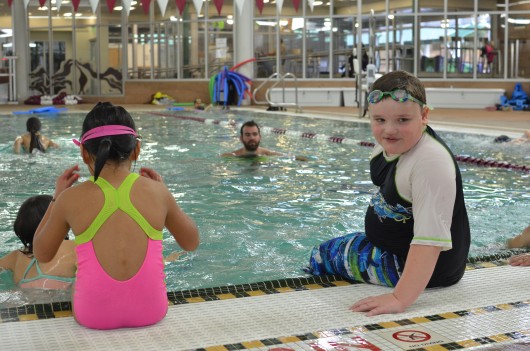 Tongass School of Arts and Science third graders swim during lessons at the Gateway Aquatic Center.

Contracted services between the Ketchikan Gateway Borough and the Ketchikan School District have been contentious for some time. Tuesday, during a committee meeting, the two bodies began combing through each service individually.

The largest of the contracted services are the district’s use of the Gateway Aquatic Center, athletic fields, roads, and fire and emergency services.

Superintendent Robert Boyle says, while it may not cost the district in dollars, the amount matters.

“Anytime you’re looking at the issuance of funds against the School District, it gets counted against our total, and it becomes the public perception that the District is X-Y-Z expensive, whether or not that cost is valid assignment to it or not.”

After close examination by borough staff, Bockhorst said, there have been some cost adjustments for Fiscal Year 2017.

“ The proposed cost proposed for the Gateway Aquatic center to be allocated to the School District has been reduced by 14.2 %, or  $73,000.”

Bockhorst also says the cost for use of athletic fields, based on new calculations has been reduced by 53%.

School district representatives say those reductions are a good start, but they believe more adjustments are needed.

The liaison committee wasn’t able to make it through each item during their one-hour lunch meeting however, the group hopes to continue its nuanced examination of allocated costs, and accounting practices sooner than its regularly scheduled meeting on December 8th.