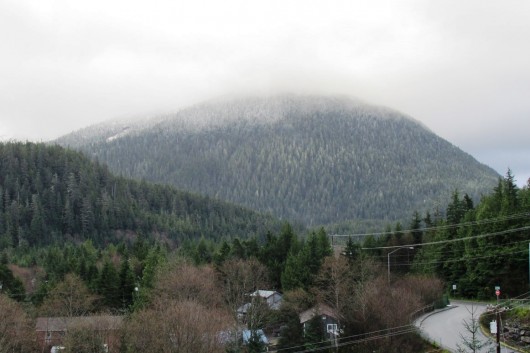 The top of Deer Mountain is hidden in clouds Friday morning. (Photo by Leila Kheiry)

A 22-year-old Ketchikan man remains missing on Deer Mountain as the search stretched into a third day Friday.

Ketchikan Volunteer Rescue Squad crews headed back up the mountain this morning to continue searching an area that they believe Justin Nathan was headed toward. On Wednesday evening, search crews found tracks in the snow pointing them in that direction.

Jerry Kiffer of KVRS says low ceilings Friday meant that crews assigned to search upper elevations had to hike up, rather than fly. That delayed the start of that portion of the search. Crews assigned to the lower elevation portions were able to start searching by 8:30 a.m.

Kiffer says KVRS is switching out search teams where possible, to reduce fatigue among the volunteers.

“It’s very difficult ground to be searching and some of these volunteers are on the third day, so we’re certainly feeling the effects of that.”

Kiffer says the search remains a rescue operation, rather than a recovery. Although, he says, conditions have not been ideal.

“Hypothermia at some point is going to be a factor, because we haven’t had any dry weather. It’s been fairly poor conditions. When they actually left on the initial hike, it was poor conditions then. So, he’s been outside now for well over three days.”

The missing man hiked up to the top of the mountain with a friend on Wednesday. They made it to the summit, then started back down. Kiffer says that at about the second overlook, Nathan wasn’t able to continue. So, his friend handed over some extra clothing and left to get help, with the understanding that Nathan would stay at the overlook. However, crews didn’t find him there.

Kiffer says that KVRS volunteers have received lots of support from the community during the search. Some people dropped off coffee and other supplies; others provided words of encouragement for the searchers.

“Some of them have been at it for three days. They’re tired, they’re wet and they’re cold all the time. It’s a big boost for them to see people come up to support what they’re doing.”

Friday’s search teams were called back at around 4 p.m., when it became dark. Kiffer says the search will resume Saturday morning.

This report has been updated to include the name of the missing man, provided by Alaska State Troopers dispatches.