British Columbia goes after leaking mine 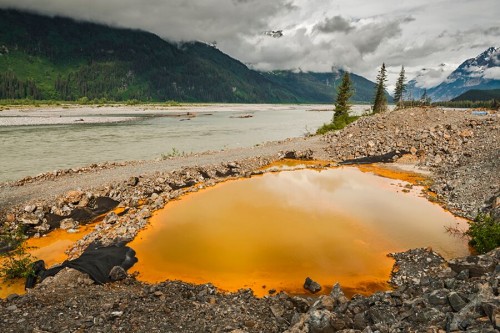 Acid drainage from the Tulsequah Chief Mine discolors a leaking containment pond next to the Tulsequah River in British Columbia in 2013. (Photo courtesy Chris Miller/Trout Unlimited)

British Columbia is telling owners of a leaky mine that it’s time to stop polluting a river that flows into Alaska.

Provincial officials on Nov. 10 notified the Tulsequah Chief Mine that it’s out of compliance with its permits.

The long closed project is on a tributary of the salmon-rich Taku River, which enters saltwater near Juneau. Fisheries, tribal and environmental groups have protested the ongoing discharges.

Owner Chieftain Metals plans to reopen the mine. But it continues to leak acidic wastewater containing metals that can harm fish.

“We’re still in the process of analyzing what they found and what their plan is. But it does look like they are planning to take action. And it seems very similar to the type of process we would take on our side of the border if we were doing compliance action with the mine,” she said at a Monday meeting of the state’s Transboundary Waters Workgroup, chaired by Lt. Gov. Byron Mallott.

Chieftain Metals built an on-site water treatment plant that began operating in the fall of 2011. It was closed the following summer because it was too expensive.

Environmental critics say the notice will only have meaning if British Columbia fines or otherwise penalizes the mine owners. 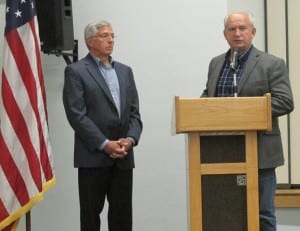 “Fish and Game and myself took him up to see the Tulsequah Chief Mine and see the water spewing into the river from a severed, 6-inch pipe. At which he took a very long look, with the helicopter hovering right in front of the pipe,” he said.

The Transboundary Waters Workgroup is made up of commissioners and other officials from six state departments.

Monday’s meeting was the first including a tribal representative, Rob Sanderson Jr. of the United Tribal Transboundary Mining Work Group and the Central Council of Tlingit and Haida Indian Tribes of Alaska.

The council’s Will Micklin, an alternate for the seat, also attended.

“We believe that tribes may have access to federal resources in the future for dealing with the transboundary issues. And opportunities that the state may not have access to,” he said.