School Board dances in Saxman 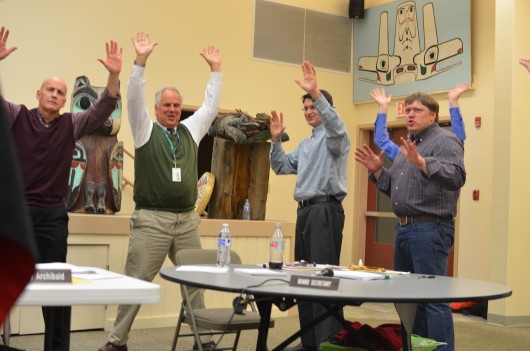 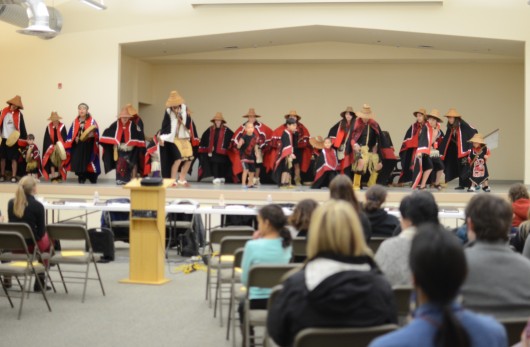 Xaadas T’ak’anlang Dancers perform at the Ketchikan School Board meeting on November 18, 2015 at the Saxman Community Center. 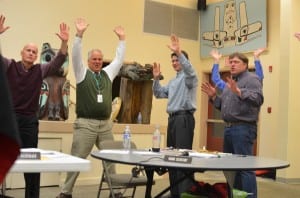 Members of the public and School Board joined in dancing at the Saxman Community Center on November 18, 2015.

Preceding the meeting The Haida Descendant Dancers performed several songs, and invited the public to join. All of the School Board members present danced alongside community members and performers.  During public comment Diane Gubatayao highlighted another aspect of Native culture in school.

“I am here tonight to challenge our district to teach more about the truth about Alaska Native history. There is a great deal of beauty to Native culture as we saw tonight, but there is also some real pain. If there is to be healing we can’t avoid the pain, we must face it. We must speak the truth.”

“We claimed 62 students, but keep in mind we originally projected 57. We have 17 new students so we could have easily had 14 under what we had projected.”

The increase in students over the projected amount, results in additional revenue from the state. The Board voted to dedicate more than half of that additional revue to hiring staff, in order to meet the needs of those students. The Board approved a budget transfer of those funds in a 5-1 vote with Trevor Shaw voting no, and Dave Timmerman was excused.

Also Wednesday the Board discussed the recently released results from the Alaska Measures of Progress test. The delayed results compared the district to others in the state, and included individual reports for each school in the district. Ketchikan outscored the state in English Language Arts and equaled the state percentage in Mathematics. But, because this is the first year students have taken the AMP test, this year’s results serve as a baseline Director of Curriculum Shannon Sines said more data is still expected.

“For example it would show us not only how all groups had performed, but also any differences we might see between students who are economically disadvantaged, students with disabilities, and any of our six different ethnic groups.”

Individual student scores were expected by the end of the month, but Sines says it will be later than that, and she is hesitant to predict a release date.

The next regular School Board Meeting is on December 16th in Borough Assembly chambers.