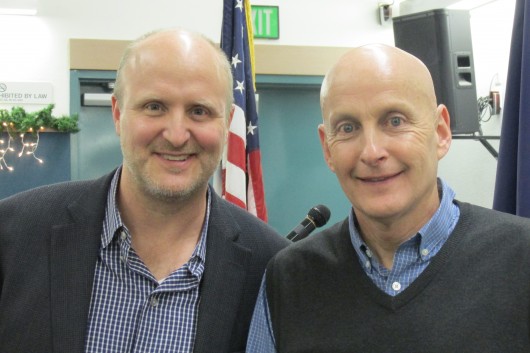 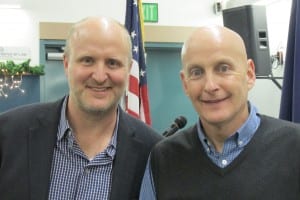 UPDATE: This post has been updated to correct statistics in paragraph two. 38%, rather than 46 percent support cuts in government spending.

House District 36 Representative Dan Ortiz held a town hall meeting in Ketchikan Tuesday night (December 1st) to discuss Alaska’s fiscal challenges and proposals to address budget problems. Ortiz shared the results of a fiscal survey he conducted over the past few months.  Ken Alper with the Department of Revenue presented information on the budget situation and proposed solutions.

Ken Alper, Tax Division Director with the Alaska Department of Revenue then spoke about the governor’s plan to address the State’s $3 billion budget deficit. Alper said he could not give complete details, but provided an overview and background information. He says the loss of oil revenue is significant and cannot be made up. He says oil prices are half of what they used to be and are unlikely to rise any time soon.

“That means our revenue is actually less than half of what it was that came from oil because we largely tax on net profits. So costs stay the same, the value of oil cuts in half and the profits are less than half.”

The price of oil is about $50 per barrel. Alper says the price would need to rise to $109 to create a balanced budget, and would need to be even higher to address the deficit.

Alper introduced features of the Governor’s fiscal plan. He says multiple things will need to be done.

“The numbers are just too big, it’s $3 billion. That’s just out of scale with everything we have. So any comprehensive solution to get to an actual balanced budget…we call it the four-legged stool. The government has to do its share. If we start taxing the people and don’t cut the government or start increasing it, you’re going to lose everybody. Because we have to put ours on the table like the $900 million that was cut this year and more to come.”

In addition to government cuts, the other three areas being looked at are taxes that would directly affect individuals, industry taxes, and tapping into the Permanent Fund reserve while continuing to build a savings account.  Alper says there will need to be a broad-based tax impacting all of us.

Alper says an oil and gas tax credit reform bill is being developed. He says it would eliminate loop holes and allow exploration credits to sunset.  Alper says a concept introduced by the Attorney General is the “Sovereign Wealth Fund.”  This is an endowment where royalties would be deposited into the Permanent Fund account allowing the State to withdraw funds from the interest gained.

“What if we took away all of that volatility and got it away from the government and we put it into the Permanent Fund, because the Permanent Fund could absorb the market swings better than operations can. You dump all of the revenue directly into the Permanent Fund every year instead of running it through the General Fund, and then you can have POMV (percent of market value) on steroids where you can pull out a larger amount every year and have modeling to say this is going to keep a stable number into the long run.”

Alper says the principal is constitutionally protected and would not be touched.

During public comment, several said they were uncomfortable with a proposal altering how the Permanent Fund is operated. One of those people is Carl Carlisle.

“We do not want nor trust government to make any more changes. Give government an inch, it’ll take a mile. When rules pass or when change is made, then there’ll be other rules and changes made. It should be totally off limits.”

“There are a lot of Alaskans that have not had to have that. You know what? It’s time. It’s time that present Alaska needs to know that we have to pay for what we have been doing. The free ride is over.”

Also suggested were so called “sin taxes” on things such as alcohol, cigarettes and marijuana.  Alper says while that might provide some revenue, Alaska has too small a population to generate enough income from those sources alone.

Lloyd Gossman says 61 percent of Alaska’s lands are owned by the Federal government. He suggested the State work to get some of that land back.

“We can go out and make our own money if we’re given the opportunity. We don’t need to look for the oil handout. Our rights and land keeps getting taken away. The regulations are taking more opportunity away from developing the resources. We can’t just keep sitting here quietly and letting it happen to us.”

Some other suggestions made Tuesday night include cutting the size of government further without collecting new sources of revenue, an income tax for non-residents, and a flat fee charged to each resident.

The Governor’s budget for the next fiscal year is due December 15th. Alper says it will contain substantial additional cuts, and the legislature will likely trim the budget further.

Representative Ortiz handed out questionnaires at the meeting. He is seeking input on preferred methods to close the fiscal gap and the level of support for the governor’s endowment fund model. He also asks which state services are most important, and which areas could be cut. Those interested in obtaining a questionnaire can contact Ortiz’s office.