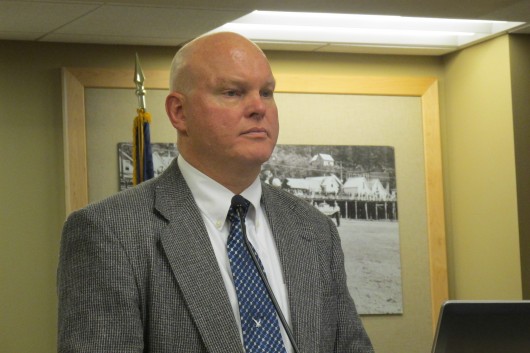 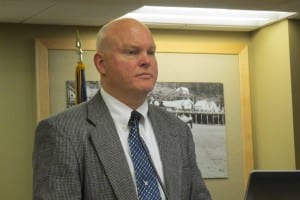 The Department of Transportation is seeking input on how to deal with a dwindling budget and imminent cuts to the Alaska Marine Highway System. A meeting was held in Ketchikan Wednesday afternoon to gather input from residents of the First City.

Neussl says the Marine Highway System budget will be cut by $14.6 million in Fiscal Year 2016. He says in 2015, reductions were made by eliminating gift shops, bars and printed schedules. 30 shore-side positions were also eliminated. Neussl says the only options left are to increase fees or cut services. Cutting service could mean fewer visits to ports, closure of ports or retiring vessels.

Neussl says in the past a port might see two ships in one day. He says eliminating redundancy by dropping one of the ships going to Prince Rupert has proven to be cost saving.

Neussl1 (0:30) “Is it less convenient? Yes. Is it less frequent? Yes. Are we leaving a bunch of people behind on the dock wishing they could get on the Matanuska because it’s sold out and full? No. We were providing much more capacity to Prince Rupert than was actually being used. Taking the Taku out and not operating it since June has shown us that that is truly the case. We haven’t seen a big drop in revenue. We haven’t seen a big drop in traffic. We don’t have people complaining that they can’t get to or from Prince Rupert other than it’s not as convenient to get to or from Prince Rupert.”

Neussl says closing ports also served by road systems is another option being considered. He says if a port is eliminated, it will likely be either Prince Rupert or Bellingham. If one had to be eliminated, opinions in the audience were mixed.

One speaker says he’s concerned about losing Bellingham because he is unable to enter Canada due to a past DWI conviction.

“I have to pay, for a DWI of 30 years ago, an extortion fee to the Canadian government of $250 to get into Canada…compared to where I would end up spending that getting on in Bellingham.”

Neussl acknowledged that Canadian law and the post-911 environment have made it difficult for some to enter that country.

Another said he didn’t want to lose Prince Rupert because its location makes it more convenient to get to certain parts of the United States.

Several Ketchikan residents who spoke Wednesday asked if highway funding was being cut equally across all transportation systems. Some say it seems the ferries are being unfairly targeted. One of those people is Terri Robbins.

“I kind of feel like there’s an elephant in the room. You’re talking a lot about changes that the Alaska Marine Highway System can make to deal with a smaller budget. No one’s talking about what we can do to make our budget place the ferry system at a higher priority.”

Robbins’ view was echoed by several others. The general feeling was that roads are given more priority than the ferries. Both Neussl and Liuken say DOT does not want to pit rail belt and coastal transportation systems against each other. Several times during the meeting Neussl said DOT will try to emphasize the importance of the Alaska Marine Highway System not only to coastal communities, but to all of Alaska.

“First and foremost we’re going to promote the Marine Highway System as part of Alaska’s transportation system. It serves way more than just coastal Southeast and Southwest Alaska. That’s an important point that I think every Alaskan needs to know. We carry 42,000 vehicles into the town of Whittier which has a population of 220 people. Not all those cars stay in Whittier. Very few of those cars stay in Whittier. They all go through the tunnel. They’re all going to Anchorage or Fairbanks or anywhere up the road system or beyond. So we do serve all of Alaska. It’s not just a coastal system.”

It is ultimately up to the legislature to decide where funds will go and Neussl encouraged constituents to talk to their legislators.

The event in Ketchikan was one of six scheduled. A meeting was held in Sitka in November. Additional meetings are planned for Cordova (December 7), Kodiak (December 8), Juneau (December 15), and Haines (December 16).

Here is a link to the presentation made at Wednesday’s meeting. http://dot.alaska.gov/comm/pressbox/arch_2015/2560-CommEngageMeetings-NOV-DEC2015.pdf