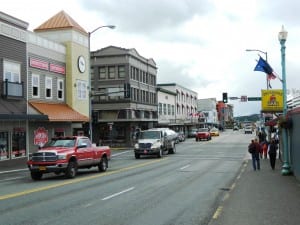 The Ketchikan City Council kicked off its review of the draft 2016 Ketchikan Public Utilities budget Wednesday, and among the issues discussed is a recommended electricity surcharge related to the utility’s use of the new Whitman Lake Hydroelectric Dam.

That surcharge would be on top of a 5-percent electric-rate increase, which is included in the draft budget along with an 8-percent water-rate hike.

The main reason for those losses is decreased revenue in the telecommunications division due to competition. In the past, KPU Telecommunications earned enough profit to cover operating losses in the other divisions.

Amylon stressed the need for all three to become financially self-sufficient without continuing to tap into reserves. The proposed rate increases are meant to move KPU in that direction.

While the electric and water rate increases are already in the draft budget, the Whitman surcharge is not yet programmed, so the Council will have to decide whether to move forward with that plan.

A previous power-sales agreement with the Southeast Alaska Power Agency requires KPU to buy power from SEAPA before using any new sources of electricity, such as Whitman. Because of that restriction, KPU agreed to pay SEAPA a certain amount when the utility uses power from Whitman Lake, but only if Whitman is used when power from SEAPA is available. That payment is called a true-up.

Amylon says the proposed surcharge would work in a similar manner as the diesel surcharge added to customers’ monthly bills when KPU uses its backup diesel generators.

City Mayor Lew Williams III asked Amylon to bring back information about what such a surcharge would look like, based on this year’s true-up costs. That information should be available at the next budget work session.

Overtime at the city and KPU has been a topic of discussion, and Amylon had a suggestion for the Council to consider. His plan is for department heads to keep a close eye on their overtime costs, “and if they come to a point where they think they’re at about 85 percent of the annual appropriation, they have to prepare a plan as to how they will address the overtime needed for the rest of the year, if additional funds are required.”

Amylon added that requests for extra overtime funds greater than $12,000 would come before the City Council for approval.

The next special budget work session is scheduled for 7 p.m. Monday. Also during that meeting, the Council will vote on a request for reconsideration of its Dec. 3 vote to move forward with a ban on commercial marijuana operations within city limits. There will be time for public comment at the start of the meeting.