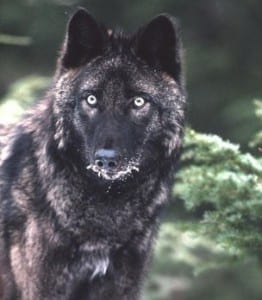 The contentious wolf hunting and trapping season on Prince of Wales Island will close on Sunday.

According to the U.S. Forest Service, hunters have reported taking five wolves since the season opened. Trappers have two weeks to report their take, so the various agencies have agreed to close the season to ensure the overall kill doesn’t exceed the quota of nine wolves for Game Management Unit 2.

The season officially closes for the winter at 11:59 p.m. on Sunday.

Wolf hunting on POW was hotly debated this year after the State Department of Fish and Game released a population study, announced in June, that indicated 89 wolves were on Prince of Wales and surrounding islands. That’s a steep drop from the previous year’s estimate of 221.

That study prompted increased calls from conservation groups to protect the remaining wolves in Game Management Unit 2. The groups asked for a suspension of this winter’s wolf hunting and trapping seasons, and when that was denied, petitioned for an emergency Endangered Species Act listing for the wolves. That request also was denied.

Conservation groups previously filed an ESA petition for the POW wolf population, and that is going through a review process. A decision on that is expected this month.