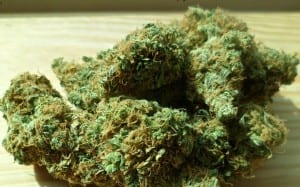 The State of Alaska’s Marijuana Control Board spent several months coming up with a set of regulations, and approved those regs in late November. French says one of the biggest changes the board made to the proposed rules before adopting them was to allow marijuana consumption at a business that sells pot.

“That had not been done by any state that has legalized marijuana: To allow retail establishments to have consumption on the premises. Alaska was the first state to allow that combination of use.”

Marijuana clubs, though, won’t be allowed based on a state Department of Law ruling. At clubs, people would bring their own marijuana to consume, and the club would make money in other ways, such as selling snacks or drinks.

French also addressed the choices available to local communities, including the option to ban retail marijuana.

“If you’re a city or a borough, you can either adopt an ordinance or have a ballot measure of your own that would prohibit all or some of these particular uses from your communities.”

Banning, whether permanently or just to buy some more time, has been discussed by City of Ketchikan elected officials, and by members of the local Marijuana Advisory Committee.

French says other local powers include the ability to add to the state’s regulations. For example, the state rules establish buffer zones around schools and recreation centers, and allow marijuana businesses to remain open for 21 hours a day.

A set of local regulations making its way through the Ketchikan Gateway Borough Assembly details which zones marijuana businesses would be allowed, shortens the operating hours for pot shops to mirror those of local bars, and increases the size of the state’s buffer zones.

The state will not allow any marijuana businesses inside the state-mandated buffer zones. The additional buffers that the borough has established would allow such a business, but only with a conditional use permit.

French showed a map of downtown Ketchikan, and how the state and local buffers would make it challenging for any marijuana business to open in that area.

“A lot of this area, especially downtown, is prohibited by Marijuana Control Board standards. If it’s not prohibited, for the most part it’s going to be a conditional use permit that goes to the planning commission.”

One audience member asked about the state’s regulations related to edible and concentrated marijuana products. French says state officials learned from mistakes made in Colorado.

And, he says, Alaska will require that each serving be individually wrapped.

“So, they can’t have a big candy bar, that someone says, ‘Oh, you just take one bite of it,’ and then put it back and that’s your serving, or take a half a bite of a cookie and say that’s fine. No: Each one of these servings has to be individually wrapped, so you don’t have this misunderstanding or people not understanding what a serving is.”

French says the state should start accepting marijuana business license applications in late February, with permits distributed as early as May.

The Ketchikan Borough Assembly will hold a public hearing and second vote on local regulations during its upcoming meeting on Dec. 21.