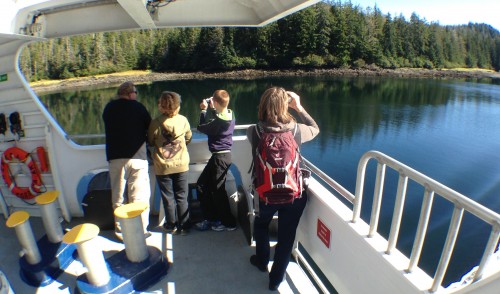 Passengers enjoy the scenery during a Sept. 3, 2015, fast ferry Chenega sailing between Sitka and Juneau. Sitka would lose most of its ferry service under a schedule based on a reduced budget proposed by Gov. Bill Walker. (Photo by Ed Schoenfeld/CoastAlaska News)

Budget cuts have already dramatically reduced Alaska Marine Highway sailings. And the recently-released spending plan for the next fiscal year calls for more. So, how does the ferry system fare in the governor’s budget? And will the Legislature make further cuts?

State officials will soon release the final version of next summer’s ferry schedule.

A draft, released in October, lays up four of the system’s 11 ships and further reduces sailings. And while there may be a few adjustments, officials say it will be largely unchanged. But Gov. Bill Walker’s budget doesn’t make it any worse.

“The schedule we’re working on is in anticipation of what the governor’s proposed budget for FY 17 would be,” says marine highway spokesman Jeremy Woodrow.

He says the budget proposes spending just over $142 million on the ferries in the fiscal year starting in July. That’s about 8 percent lower than this year and about 11 percent less than the previous year.

But Woodrow says the cuts are not as deep as they sound. He says only about a third of the full, $13 million cut impacts operations.

“The rest of those reductions come from a difference of last year’s budget being supplemented with excess fuel trigger money plus a one-time appropriation to allow the marine highway system to continue to run its schedule that was published the prior year,” he says.

Overall, the budget funds about 300 weeks of sailings by the remaining ferries. That’s just shy of a 15 percent reduction.

That’s what the governor wants. But it’s probably not what the Legislature will accept. Majority leaders say Walker should have proposed many more cuts across the operating budget.

He serves on his chamber’s Transportation Committee, as well as the panel that deals with the ferry system’s operating budget.

“I know a lot of the legislators don’t understand what the Alaska Marine Highway System does. They understand that it gets their cars down here for the session. And that’s about all they understand,” he says.

Egan, a Democrat, worries about far deeper cuts to the system’s budget and schedule. Sens. Dennis Egan, Bert Stedman and Donny Olson (left to right) talk on the floor of the Alaska Senate on March 18, 2014. (Photo by Skip Gray/Gavel Alaska)

“The cuts are pretty substantial to start with and if the Legislature goes further, it’s going to be more detrimental,” he says.

“My concern is fairness within the marine highway and fairness across the state, that we don’t single out a couple of regions that end up with disproportional reductions. Clearly we haven’t shut down any highways in the Railbelt. And as far as I know, we have no plans on doing so,” he says.

Reductions in funding and sailings results in fewer jobs.

But marine highway spokesman Woodrow says no one’s been laid off yet, because of turnover.

“What’s happened to date is there hasn’t been anybody who’s wanted a job whose lost work, because there’s been enough positions available. What may happen in the future with less boats running, only time will tell,” he says.

He says the ferry system employed close to 1,000 people in the 2014 fiscal year, the latest with totals available.