Revilla dresses up and dishes out 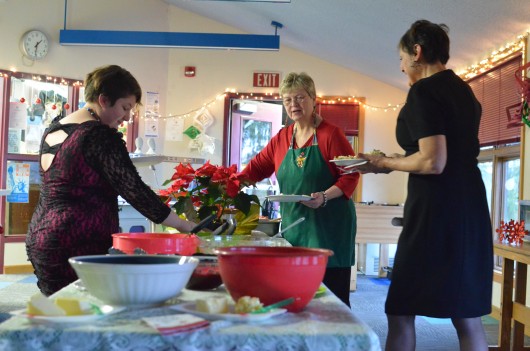 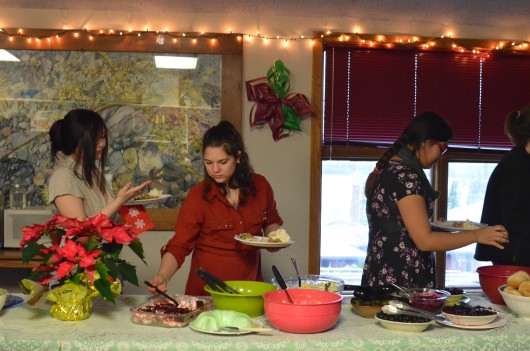 Students and staff serve themselves lunch at Revilla Alternative School on December 17, 2015.

Before the Ketchikan School District took two weeks off for vacation, Revilla Alternative School hosted a holiday lunch that was a much about the students as the meal. The lunch has become an annual tradition.

The lunch was served a little after 1 p.m. in a kitchen between the high school, and 7th and 8th grade rooms. Iris Gilliard was serving punch she made, from a big bowl with her friend.

“It’s ice water. Pineapples, lemonade and some cherries in it.” 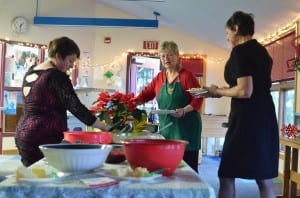 Students who prepared the meal were the last to serve themselves lunch.

This year, a lot of students including Gilliard chose to dress up. She’s serving punch in formal wear. Her Language Arts teacher, Laurie Gillett, is the ringleader for the event, and the idea came from a literature unit she taught eight years ago.

“It had to do with Christmas and other kind conversation came up, how to help people, what to do in our community. The kids decided to have a meal for our school. So, we started there and then we started inviting people from our community who have come in and helped throughout the year.”

Revilla’s student population is about 100, but the lunch was about twice that size and included all the teachers, police officers and state employees who help students throughout the year.

Principal Kurt Lindemann says this is what makes Revilla feel like a family. The alternative school’s grant from the state of Alaska helps pay for these kinds of activities that bond the school together. “It’s more than just a meal. Good for morale good for the staff good for all of us. When morale goes up the building gets taken care of. I think the kids work harder at their school work too. They have a lot more pride in what they do. You just feel everybody kind of lift up a little bit. It’s really a nice feeling.” 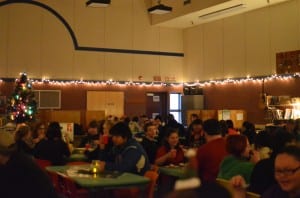 Everyone ate in the 7th and 8th grade classroom, which was decorated for the lunch.

The whole school helps out in some way. Even its neighbor across the street, Houghtling Elementary, loaned some chairs for the formal dining area. High schoolers helped set up tables and chairs the day before, but preparations started weeks ago and incorporated curriculum

“The math. Trying to figure out how to serve 160-200 people how to adapt recipes, what is going to taste good. It’s fun. Plus I get to work one-on-one with kids throughout our two-week period, or small groups of kids. So they’ve done it all, all the decorating all of it. So the finished product is kind of fun. A reward. Looks good huh?”

What wasn’t eaten during lunch was served the next morning during a weekly breakfast, another tradition that binds the school together, but takes a little less preparation.