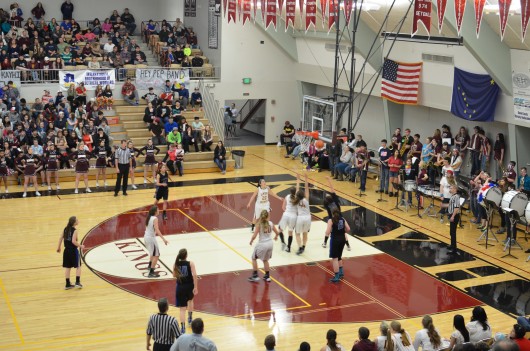 The Lady Kings basketball team in the final day of the 2015 Clarke Cochrane Christmas Classic, December 30 2015.

The Clarke Cochrane Christmas Classic started in 1977 and has since become a part of the culture of Ketchikan, and a tradition for basketball teams in Southeast, even drawing teams from California and as far as Australia.

This year, both the Ketchikan High School boys and girls teams ended up in the finals. Before the championship on Wednesday, Kayhi held its homecoming ceremony, which included two girls-team members who then made a quick change out of formal wear and into their uniforms. The girls took the title, but the boys lost by six to Auburn Mountainview from Washington. Here are some sounds from the court.

That was an audio postcard from the annual Clarke Cochrane Christmas Classic. You heard from Loreli Richardson, Alexis Biggerstaff, the Kayhi pep-band, cheerleaders and all the fans.