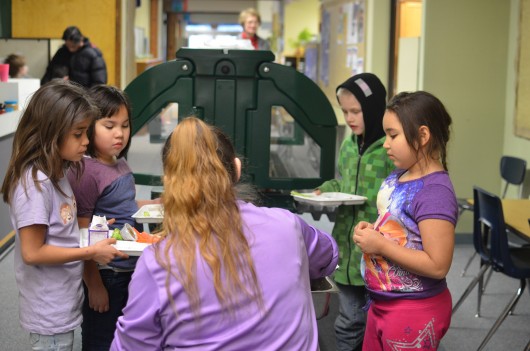 Ketchikan’s Tongass School of Arts and Sciences has been nationally recognized as one of the healthiest schools in the nation. The charter school was one of 40 schools this year given a Healther US School Challenge award by the by the U.S. Department of Agriculture. Tongass was the only school in Alaska to take the prize recognizing excellence in nutrition and physical activity.

Kids in bright-colored jackets dart around a sunny field outside school and echoes of bouncing balls and footsteps come from the playground underneath the school. It’s recess. Kelvin Jiang is playing soccer, which he does most days. He is a third-grader and one of the little kids. 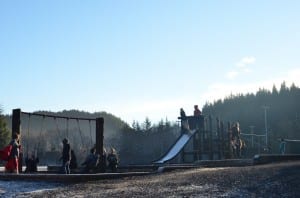 Recess at TSAS on a sunny winter day.

“It’s fun. The big kids are against the little ones. “Who’s winning?” “I don’t know I think the little kids.”

The score of the soccer game doesn’t seem to matter as much as running around, and the bell means the game is over for today and time for lunch.

Kids shed their coats and gloves and line up at the salad bar. It’s on wheels and kid size. Inside chilled trays are grapes, apples, carrots, broccoli, salad and black beans. At the end of the line is Roseanne Wickman.  “I’m the food service person for… They call me the lunch lady” 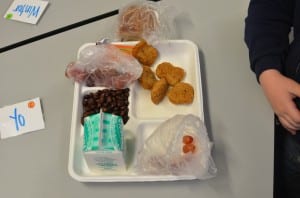 Lunch includes a main course, a serving of vegetables, fruit, protein and milk.

“Yep anyone that comes through here has to get past me before they are allowed to get their main dish.” If they don’t have the cup of vegetables they need or any fruit, they get sent back. “ Okay circle back around a grab a veggie”

The district’s wellness coordinator, Emily Henry said only a handful of kids are sent back. “Most of them know, they’re like look Mrs. Cindy I have carrots on plate. They know.”

Henry says this is the way lunch works at all of the schools in the district. The recent award for excellence in nutrition is in the details. How appetizing the broccoli looks, that the tongs are at arm’s length even for the littlest arms, that the salad dressing is pre-portioned, and how the salad bar is arranged. “ Fruit offered at the beginning and end of salad bars so kids have the optional chance of grabbing it.”

The salad bar itself gives kids a choice in what they eat. A cup of vegetables is non-negotiable, but between carrots, broccoli, lettuce the choice is theirs.

Giving out the award, the USDA is looking for other details as well. “ Having lunch served in a room that’s also used for something else. So this is also as you saw where the student council meets and where their art teacher does art class, so it’s kind of a multifunctional room.”

Also, lunch after recess is important. Henry said studies show if kids have expelled some

energy before they eat, they come hungrier and eat better.

However recess isn’t the only physical activity during the school day. Kids at Tongass get 60 minutes of P.E. a week, and go swimming once a week, but there’s also movement in the classroom.

In one class, kids all face the projector where a yellow cartooned play-doh man flexes on a beach, in front of the golden gate bridge, in space and in a field with a kitten. The video is one of thousands of two-minute free online videos designed to give the brain a break and release energy.

All these details add up to a bronze award from the USDA. Henry said the only thing keeping TSAS from silver or gold is the number of kids eating school lunches. They average about 41%.

TSAS principal Marian Gonzales said that number has gone up, and she’s working to keep it going in that direction.  “ I think the quality of the lunches is really good now. The halibut days, the salad bars are huge, kids really like those.”

She said kids’ taste in food is the biggest obstacle. Some days are more popular like chicken nuggets or Alaska salmon, which draw about 44%. That the most popular days are not far from the average is a good sign that kids like what’s for lunch. 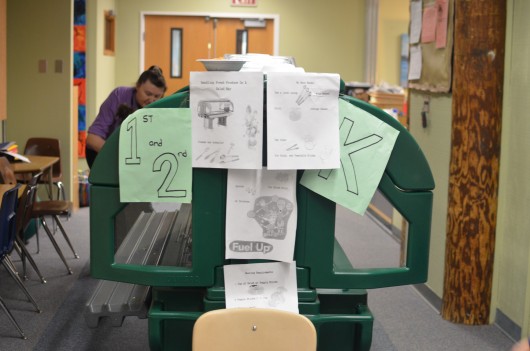 Roseanne Wickman cleans up the salad bar after lunch at TSAS.