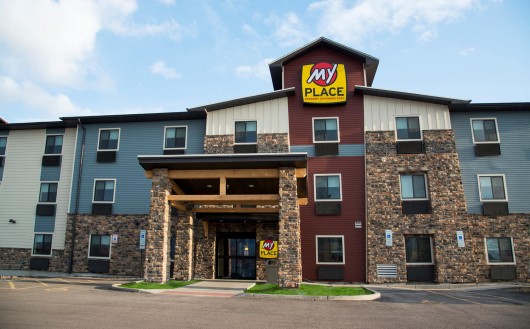 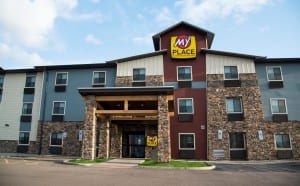 My Place officials hope to open a new hotel branch in Ketchikan this fall. (Photo courtesy My Place)

Construction of a new hotel in Ketchikan was delayed last year, but officials with the My Place chain still plan to build a brand-new extended-stay hotel on Tongass Avenue.

Joe Dinger is vice president of development for Pacific Northwest My Place Hotels. He said they did some initial site work last year, obtained building permits and cleared trees from the lot. But then, Ketchikan’s typical fall weather kicked in.

“You’re fully well aware of how fall and winter are there, and it makes things difficult for construction. So, we elected that it made more sense to demobilize the limited amount of people we had there at the time, and make another run at it this spring.”

Dinger said that with the permits in place, construction should be relatively easy to resume. Weather-dependent, that work should start this spring, perhaps as early as mid-March.

Dinger said the plan is to complete construction before the winter weather kicks in again.

There was a rumor that work on the site stopped last year because a tree with an eagle’s nest had been cut down during the clearing process. Dinger said he heard the rumor, too, but it’s not accurate.

“I think when the trees got cut down and then everything kind of stopped, that was a natural progression of one’s thoughts. But, there hasn’t been a winged animal involved in the process to this point.”

In addition to the Ketchikan My Place hotel, the chain is opening hotels in Anchorage and Fairbanks. Dinger said the Anchorage hotel should be open for business soon. The My Place website indicated a spring opening for the Fairbanks branch.

According to the website, there are about 20 My Place hotels open nationally, with eight more under development. The extended-stay hotel offer rooms with small kitchens, as well as on-site laundry facilities.

In a previous interview, Dinger said the chain likely would serve people visiting the hospital, along with shipping-industry employees and others staying in Ketchikan longer than a few days.

The site of the hotel is across the street from the Vigor Alaska shipyard, and a couple of blocks from Ketchikan’s hospital. It’s also next door to a local grocery store.

The new hotel will have 64 rooms, and Dinger anticipates it will employ about 10 people once it’s up and running.