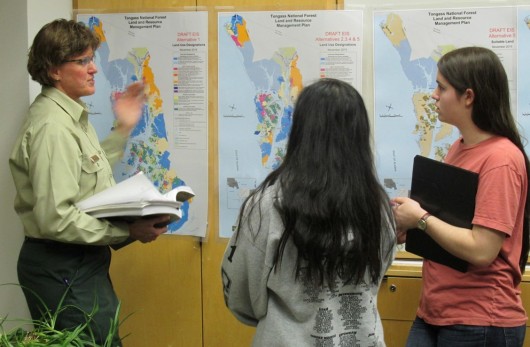 About 35 people showed up Tuesday night for an informational open house focusing on the proposed Tongass Land Management Plan amendment to transition from old-growth to young-growth timber harvest.

As the open house began, most of the people in the room were in U.S. Forest Service uniforms. They were waiting for the public, and the public did slowly trickle in as people got off work.

They milled in the Southeast Alaska Discovery Center room, looking at laminated charts pinned to the walls, leafing through handouts detailing the proposed amendment, and listening to Forest Service officials explaining the charts.

The Ketchikan open house is the second in a series planned in Southeast Alaska communities. Project Manager Susan Howle says that so far, people are interested in specifics about the preferred alternative, which calls for a 15-year transition period.

“I think he main concern is just how this is going to work once we select an alternative and start the transition,” she said. “How it’s all going to work.”

And how is it going to work?

“Well, that’s a good question,” she said. “The secretary of agriculture has provided us with 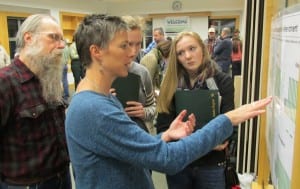 direction to make this transition in a 10-15 year time frame.”

Those 15 years are meant to give the timber industry time to adapt, and time to get new equipment to handle smaller-diameter trees, “so that we can start gearing up to offer more young-growth timber after the transition.”

Ernie Eads runs what he calls a “rinky-dink” sawmill over on Prince of Wales Island. He produces cedar planks, primarily for local sale. But, he says, even now he can’t get the logs he needs. Eads had to take a job in Ketchikan because he’s not making money through his mill.

“It’s been five years since I’ve been able to buy a timber sale,” he said. “I had to lay off my employees.”

Eads doesn’t support a transition to young growth. He says the Forest Service should instead manage old-growth harvest better, to ensure a steady supply.

Wayne Weihing, a board member with the Southeast Alaska Conservation Council, had a 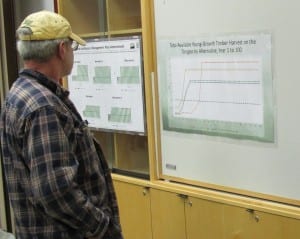 Ernie Eads looks at charts during an open house on the TLMP amendment. (Photo by Leila Kheiry)

different take. SEACC has endorsed a faster transition to young-growth harvest, to minimize the amount of old growth that’s cut down.

Weihing says there’s plenty of old-growth supply out there, especially with new offerings from the state. He notes that the proposed forest plan amendment called for 46 million board feet of old-growth timber each year.

“That’s more than any industry can use, especially (with) the fact that 50 percent of it goes out of here on log ships,” he said. “That’s really disturbing to me because it’s jobs and it doesn’t fit the economics.”

But, Eric Nichols of Alcan Forest Products – one of the larger operators in the region – agrees with Eads that there’s not enough volume to meet demand, in part because the state sales are tied up under appeal.

Federal timber sales often are litigated, too, which in turn slows down the supply. The transition is supposed to help with that litigation, because most of the controversy is over harvesting old-growth stands. But, Howle told the people at the open house, there is a tradeoff.

“And what that means is, you have to go into some areas that, in our current plan, you wouldn’t go into,” she said. “Like riparian management areas, the beach an estuary fringe and old-growth habitat LUD (land-use designation). Those are some of the areas that we are seeking youth growth.”

That led to another concern. Clarence Clark asked whether the proposed 15-year transition can happen without modifying the wildlife conservation strategy. He notes that the current plan, with no amendment, would allow a transition to young growth in 35 years, without any modification to that strategy.

“This is a conservation strategy that so far has prevented the listing of the northern goshawk as an endangered species and the wolf,” he said. “But yet, we’re going to compromise or modify it so we can transition to young growth at a quicker rate.”

Howle responded that the Forest Service will maintain the integrity of the conservation strategy, but she agreed it will have to change.

Nichols asked Howle about the economic viability of the transition.

“Well, right now, everything we’ve done is based on a model,” she said, prompting chuckles from the audience.

Planning operations staff officer Rick Abt added that the market is not always predictable.

“It just depends on retooling,” he said. “What we’re doing is showing that we can provide this young growth.”

Tuesday’s open house was one of a series scheduled in Southeast Alaska communities. The traveling open house was on Prince of Wales Island on Monday, with an event in Wrangell on Wednesday. Other open houses are set for Petersburg, Juneau, Sitka, Hoonah and Yakutat.

The comment period for proposed amendment ends on Feb. 22. A final decision is expected in mid-December.

You can submit written comments by emailing them to comments-alaska-tongass@fsfed.us

You can mail comments to: