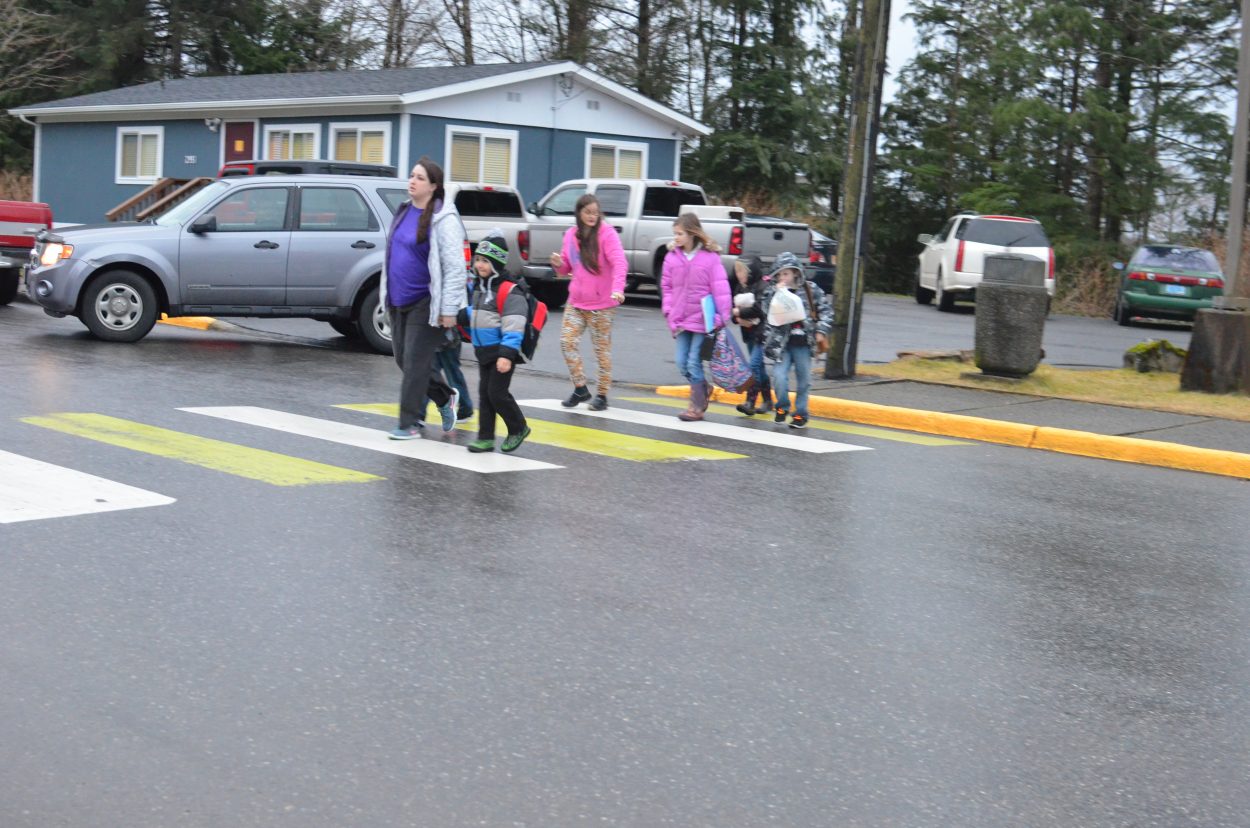 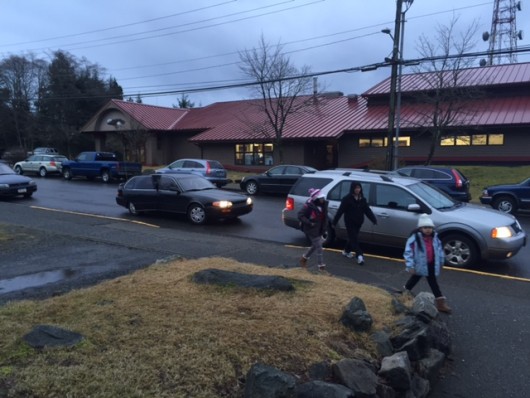 Ketchikan’s largest elementary school has about 350 students. It is also the only school in the district without a designated pick-up and drop-off driveway loop. But, that may change.

“There you go. Right there.”

Just after the morning bell in front of Houghtaling Elementary School,  Julie Tibbles points to something she has become very familiar with.  “Yeah there you go. Parking in the yellow, gets out, let his kids out, walks in front of his car where they can’t see and he probably doesn’t even realize his kids can’t see around his car.”

Tibbles is a parent of two at the school, and over the last year has had several scary moments on the street herself.

“My daughter and I were standing at that crosswalk last January waiting to cross, and there was a large truck right up against a crosswalk in the yellow. Standing on the sidewalk I looked as best I could, didn’t see anyone coming and we went to step out. The second we were just about to step beyond the truck and — see now we’ve got a van parked in the driveway area.”

She interrupts to point out another parking violation.

“So, as soon as we were about step out. Again. You can just stand here all day and watch.”

Parking against the yellow curbs blocks oncoming drivers’ ability to  see someone standing at the cross walk.

“So as soon as we were about to step out away from the truck into the crosswalk, this car –obviously speeding — just flies past us, just about took my head off.  I grabbed my daughter and jerked her back and we were okay, but I don’t think she, he or she whoever it was, I don’t think they ever saw us.”

Despite a recent paint job, the yellow doesn’t do much to deter parents who are in a hurry and left with few legal options to drop off their kids.

At the beginning of the school year, Tibbles alongside three other parents, formed the student safety committee. Their first priority was to make the start of the school day safe.

Tibbles said she felt like the issue wasn’t getting traction, so she had a meeting with Superintendent Bob Boyle. Soon after that, she was walking around school property with borough staff. Last week, about 40 parents, teachers and neighbors sat in child-sized chairs at the school library to talk about construction.  Jonathan Lappin from the planning department presented two options. 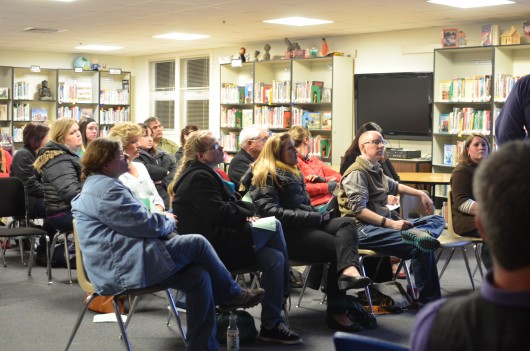 About 40 people attended a meeting about student safety on Baranof. January 7,2016.

“At this point we’re not really making a decision. At this point, we are asking for input. Some ideas have been floated, we came up with some thoughts, we want to present it to you folks to get your input. Maybe you think it’s a bad idea. Maybe you know something we don’t.”

The first option made a tight loop behind the school, and the second looped around the field further back. During discussion, a third option came up that would move the bus drop off, and expand a parking lot in front of the school into a grassy area that is never used.

Tibbles knows that construction may take a long time, and she’s working on a short-term fix as well.

“We have sent out three different letters home with students asking parent volunteers to come be crossing guards. Right now we had absolutely zero parents offer to volunteer.”

They need equipment for that, too. After scouring district storage, they found one cone and one stop sign.

While accounts vary on how long the traffic on Baranof has been a safety concern, there is a consensus it has gotten worse.

Buses both pick up and drop off kids at Houghtling Elementary.

Houghtaling serves as a pick up center for kids busing north to Point Higgins Elementary and south to Fawn Mountain. There is also traffic from Revilla Alternative School across the street, Ketchikan High School down the block, Holy Name Catholic School around the corner, and near-by residents.

Some residents have not been happy with the proposed changes and have brought complaints to Tibbles directly. Living in Ketchikan three years, she said at times she still feels like an outsider, but she thinks that has also helped her see a problem that has become normal for others. She said the past few weeks of heated discussion has been an emotional roller coaster.

“No matter how many sleepless nights I have. No matter  how many days I cry at Starbucks I know I’m doing the right thing for these kids.  Their lives are worth it.  Even though a new drive getting put in may not happen until my kids are out of Houghtaling, it is still worth the fight for those kids to come.”

About three years ago, a kindergartener was hit and injured in a crosswalk in front of the school. The next year a crossing guard appeared, but soon after disappeared. Tibbles said she doesn’t want to wait until someone is killed before student safety is improved.