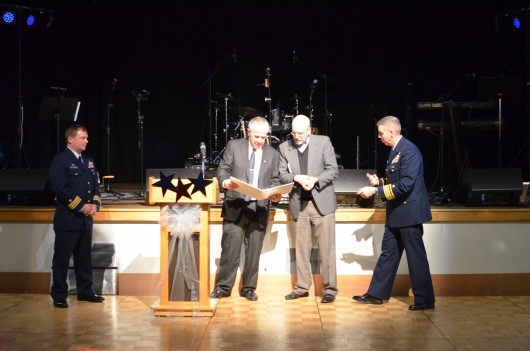 The clatter of high heels and camera flashes welcomed guests to the Ketchikan Chamber of Commerce’s Celebration of the Stars.

The evening began with a presentation by the U.S Coast Guard.

Ketchikan joins 21 other communities across the country with the moniker, including two others in Alaska: Sitka and Kodiak.

“As a tight-knit island community of 14,000 residents, we rely on the ocean to eat, play and make our living. Ketchikan is one of the busiest cruise ship ports in the U.S. and is nicknamed the salmon capital of the world, as we rank in the top 20 for commercial fishery landings. None of this would be possible without the brave men and women of the U.S. Coast Guard. “

The Coast Guard presence began in Ketchikan with its Alaska predecessor, the light house service, in 1918.

The evening continued with the presentation local awards. Ketchikan Chamber of Commerce Executive Director Julie Isom presented the award to the 2015 Business of the Year.

“The name of this business says that it’s about what makes Ketchikan the robust outdoors place that it is. 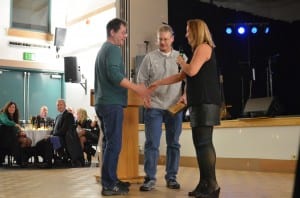 Kenneth Perry and Eric Tyson accept the 2015 business of the year on behalf of Timber and Marine Supply.

Kenneth Perry and Eric Tyson accepted the award on behalf of Timber and Marine Supply. Entrepreneur of the Year went to the co-owners of Sweet Mermaids, Debi Hansas and Shirley Solaas, who after three years in business expanded and doubled their downtown space.

“It has been our pleasure. We’ve shed tears and look at our bank statements and go, ‘What the hell are we doing this for?’. It’s crazy. Shirley and I, we truly enjoy doing what we do.” 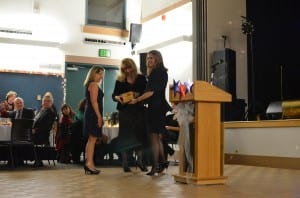 Sweet Mermaids co-owners were honored as Entrepreneur of the Year. 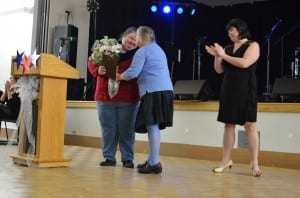 Kelly Johnson receives flowers along with her award for outstanding youth leader.

Outstanding Community Service goes to couple: Linda and Johnny Gilson for their work with the First City Council on Cancer, which provides financial assistance to residents with a cancer diagnosis. 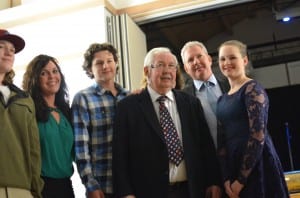 2015 citizen of the year, Mike Salazar accepted the award surrounded by his children and grandchildren.

“Our 2015 Citzen of the Year has been a resident of Ketchikan since childhood. Early in his life he worked as a choker setter logging for Ketchikan Pulp Company, a commercial seine fisherman and a seaman in the Bering Sea. His life took a much different turn in 1963, when he joined the U.S. Army, where he learned to fly Huey helicopters.

He completed two tours in Vietnam and received many accolades. Returning to Ketchikan, he founded and sold his own business, and held local office as Borough Mayor. Mike Salazar accepted the award surrounded by his family.

The evening ended with a live auction hosted by Bob Vincent, and music from the Rain City band. 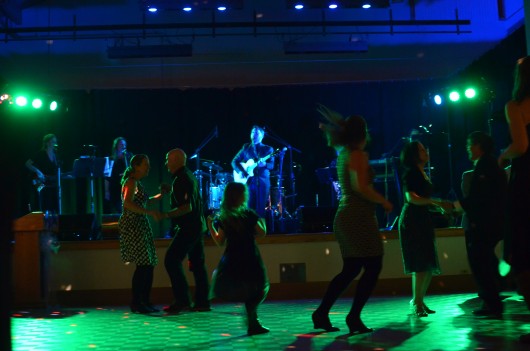 Music from the Rain City band ended the night.