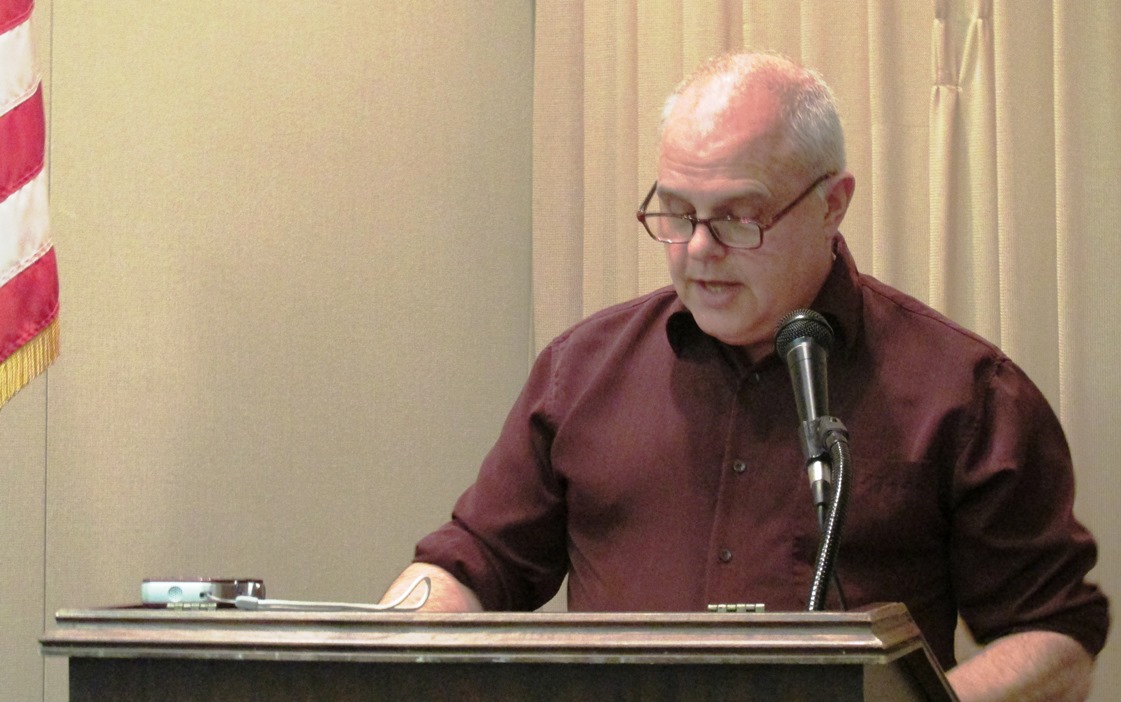 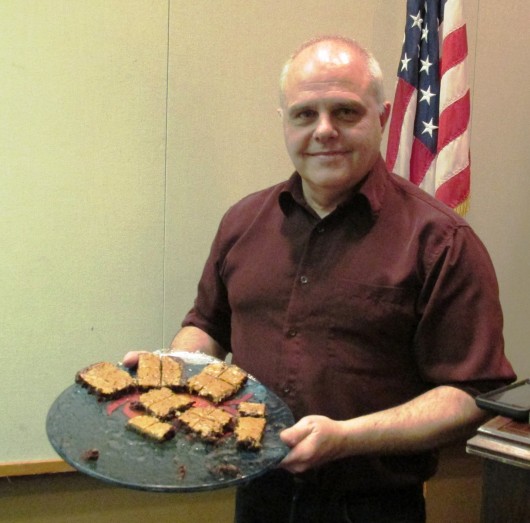 Mayor Lew Williams III with “special” brownies he passed out during his presentation to the Chamber of Commerce. The brownies didn’t contain any cannabis; It was a joke. (Photo by Leila Kheiry)

“The state of the city has gone to pot,” Williams said at the start of his presentation. “That is my theme today.”

Marijuana legalization, and how and whether to allow a cannabis industry, has dominated discussion at the Ketchikan City Council level for quite some time.

That part of the debate appears resolved after the Council voted in late January against a moratorium on retail pot. Mayor Williams had favored the temporary ban, but said he still gets along with people who disagreed with him on that topic, such as Spencer Strassburg, a local business owner who led the charge to allow a retail marijuana industry.

“In fact, me and Spencer spent last night doing a little baking,” Williams said. “And we have some special brownies for you today. Spencer, can you hand these out to everybody who wants one of our special brownies?”

Williams quickly clarified that they were not pot brownies. The brownies did have a leafy substance baked in, but Williams later said it was tea leaves, and that they were actually made by a local downtown bakery.

Williams said he’s been doing some research since the Council’s decision to allow retail pot, and said the zoning buffers alone will challenge anyone who wants to open a cannabis business inside city limits.

“I don’t really worry about sales in the city,” he said. “There’s really not a lot of places you can sell.”

Downtown is pretty much a wash. There’s a possible location on Berth 4, which is close to downtown. Williams said there’s also some opportunity near the canneries on Stedman Street. Beyond that, Williams said retail marijuana in city limits is possible in the Alaska Marine Lines area, near the airport terminal and around Wal-Mart.

Many of the restrictive buffer zones are due to the population density within the city, along with all the churches, schools and youth recreational facilities. Outside of city limits, the opportunities are greater because the population is more spread out.

But, Williams said, the cost of creating a fledgling pot industry is going to be an even bigger barrier than zoning.

“Each one of these, like if you’re a cultivator, a manufacturer, and a retailer, they all have to have security, they all have to have product tracking, so any plant 8 inches or higher has to be tagged and tracked, and that’s even to put it in your truck and drive it to the store,” he said. “So, as I went through here and kept looking, I was, ‘Wow, the cost of this is going to be unreal.’”

Williams said establishing a potency-testing facility has been estimated to cost at least $500,000 in start-up funds. That is equipment, facility and personnel costs. The regulations require that testing be conducted by someone with a degree and field experience.

“And I can see Anchorage, somebody up there, Fairbanks, taking that in and being able to accomplish that, but for each little community I find that’s going to be a stretch,” he said.

But, it’s possible Ketchikan won’t need its own testing facility.

Cynthia Franklin, director of the state’s Marijuana Control Board, recently told KFSK Radio in Petersburg that she believes licensed pot businesses in small, rural communities will be able to transport product by air or boat to testing facilities in larger Alaska cities. 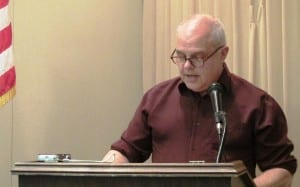 Franklin told KFSK that a memo from the U.S. Attorney General’s office to states that have legalized marijuana indicates that federal law enforcement will focus on keeping pot away from kids and keeping pot within the borders of those states, rather than on transportation of marijuana within those states.

Williams told the Chamber that there is an option, if transporting marijuana for testing becomes a problem.

“Nothing in AAC 306.200 precludes local government from applying for marijuana establishment license under the provision of this chapter,” he said.

That option has been discussed previously, but so far, no city official has brought forward a proposal to that effect. No matter what, though, Williams said, “I see an industry here that’s going to be very slow in getting started. I’m betting by next year at this time, there might be a license, but I don’t think anybody is going to be selling pot.”

At least, he said, not in the near future.

Williams addressed some other issues during his presentation. He said Ketchikan’s economy has been relatively flat for the past few years, which has been a challenge to residents and local government.

Williams said the upcoming cruise season looks promising, but he’d like to see oil prices go up, not just for the sake of the state’s oil tax revenue, but also because Ketchikan’s sales tax income heavily relies on fuel prices.

Williams briefly address the ongoing effort by the city to find a buyer for Ketchikan Public Utilities Telecommunications Division. He said there was some interest, but the only real offer so far has been from GCI. But, he said, the Council didn’t want to let that company have a monopoly in the community.

There is another potential offer in the works, and Williams said the city won’t keep residents in the dark if it appears to be a viable proposal.

“I’ve had people say, ‘What’s the process?’ The community voted to have the Council be able to make a decision on it, so we wouldn’t have to go to a vote again, but the process would be so open and so involved with the community, because it is a community asset,” he said.

In the meantime, KPU Telecommunications is still working toward adding cellular service to its product line. That was supposed to be available at the start of this year, but Williams said, it likely won’t be offered until July. When KPU does offer cell service, it will be through Verizon.