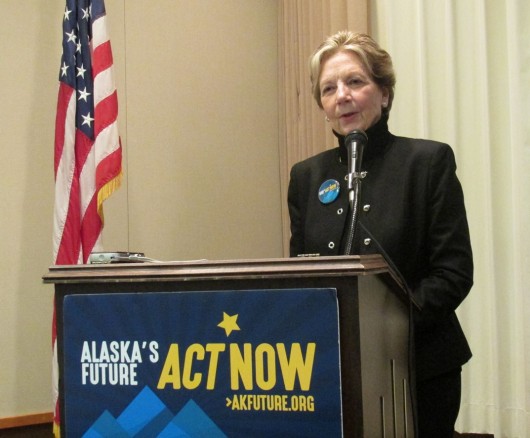 A coalition of Alaska groups and businesses have come together to form a statewide organization focused on encouraging lawmakers to use a portion of the Alaska Permanent Fund earnings to ease the state’s deficit.

Representatives of Alaska’s Future were in Ketchikan this week, and gave a presentation during the regular Chamber of Commerce lunch. Longtime Alaskan Judy Brady of Fairbanks was the main speaker, and she stressed that the $3.5 billion deficit brought on by low oil tax revenue is huge, and the state can’t wait.

“We think that if the Legislature does not take some action this year to solve this problem, we will miss the best opportunity that we have to come through this with our skin still on,” she said.

Brady said the state needs to use all the tools available to fill the budget gap, and that includes the Permanent Fund earnings.

She noted that the Alaska’s Future plan calls for using only part of the earnings, leaving the rest for continued Permanent Fund Dividend distribution to Alaskans. Those PFDs would be reduced, which many Alaskans object to. But, Brady said, at least Alaskans would continue to receive them.

“I will tell you that if we don’t do something in the next three years, we won’t have to worry,” she said. “There will be no Permanent Fund Dividend because the whole thing will be used.”

That’s because the state’s other savings account — the Constitutional Budget Reserve — has only about a year’s worth of money in it to cover the deficit, Brady says. And after that’s gone, the only source left will be the Permanent Fund.

She says the state still will need to cut spending and raise taxes, but it’s impossible to cover the deficit with those actions alone.

Alaska’s Future members include GCI, various labor unions, Trident Seafoods, Samson Tug and Barge and Alaska Marine Lines. You can see their complete membership and other information online at www.akfuture.org.