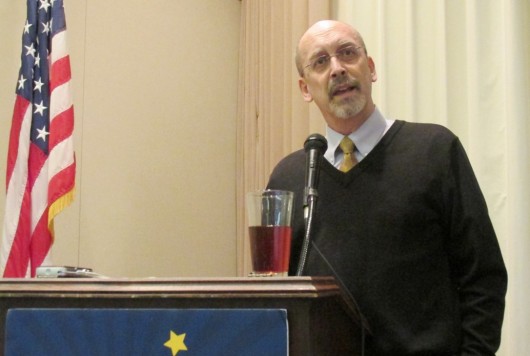 Landis said declining oil tax revenue is bad news for state government, and that bad news will ripple down to local governments. But, he said, it’s not all doom and gloom.

Landis said the borough has an education reserve fund with about $1.7 million in it, and the Borough Assembly plans to increase that emergency reserve to $2.5 million, so that local schools have a cushion if state funding comes up short.

Property taxes were lowered a few years ago, and Landis said there are no immediate plans to increase the current 5-mill borough property tax. He said the borough also has avoided taking on new debt, and refinanced existing debt to take advantage of low interest rates.

Landis also touched on some of the services provided by the borough, including the Ketchikan International Airport, a state-owned facility that is managed by the borough.

“It takes about $5 million (a year) to run the airport, and the state kicks in about $500,000 of that. The rest is local enterprise fund,” he said. “That’s been a success story for the state and for the borough.”

Landis said Ketchikan’s airport is the fifth busiest in the state. The borough recently finished replacing a roof on the airport’s tower, and soon will replace the facility’s heating system with a biomass boiler, paid for through a state grant.

Landis added that the borough’s public transit system had a record ridership year recently, partly because of all the tourists who take advantage of the free downtown shuttle that operates during the summer season.