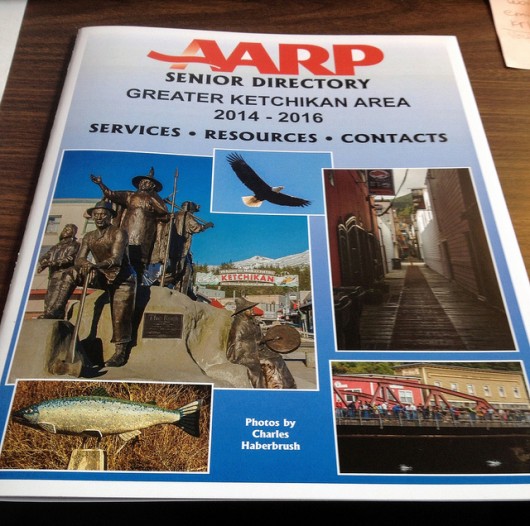 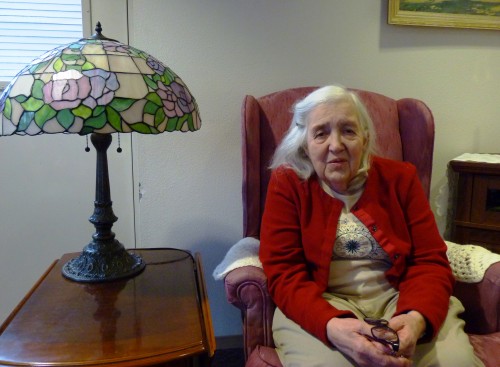 Southeast Alaska is growing older faster than any other region in the state. This so-called “Silver Tsunami” is expanding the need for housing, transportation, healthcare and social services.

CoastAlaska public radio stations are presenting a series of reports talking to our older community members – and those they work with – about many of the issues they face. In this first Aging Southeast report, CoastAlaska’s Ed Schoenfeld explores why our senior population is growing.

Illuminated by a stained-glass lamp, Spartz chats about aging in the city that’s been home for most of her life.

She says not long ago, she ran into a friend at a concert. Both noticed something that’s becoming more and more common.

“We looked around the room and he said, ‘You know, these are the same people that were going to concerts 20 years ago, 25 years ago. Except they’re all turning gray or white.’”

Spartz is part of the fastest growing demographic group in Southeast Alaska.

She and about 9,200 others make up a little more than 12 percent of the region’s population. That’s almost a one-third increase over five years ago. It puts Southeast’s average age at about five years older than Alaska as a whole.

But it hasn’t always been that way. Spartz remembers when cold winters and limited medical care sent more Alaskans south. 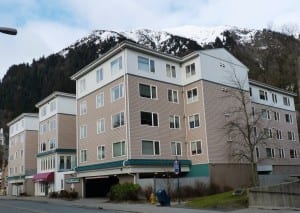 “When I was a young person growing up, it was just accepted that you would leave Juneau once you reached retirement age,” she said.

“In Alaska and in Southeast Alaska, you had this huge cohort of the baby boomer generation coming in in the 1970s,” she said.

Boomers are defined as those born after World War II, primarily between 1946 and 1964.

Once they grew up, they came to work in newly developed oil fields and on the Trans Alaska Pipeline. With a recession hitting the Lower 48, still others moved for retail, construction or government jobs created as oil revenue increased.

“And that generation has really aged in place,” Schijvens said. “So you’ve seen this really big bubble of baby boomers moving across the aging spectrums. And now that age bubble is moving into their older years. So they continue to dominate the demographic shifts in Southeast Alaska.” 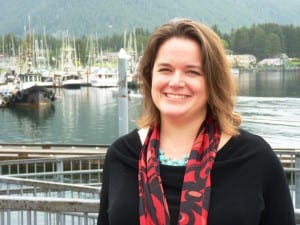 Some people still head south for an easier climate, advanced medical care or to be closer to family.

“Alaska has a really strong base of supports: Senior meals, transportation for seniors, homemaker services, along the continuum of care, which has really helped to support seniors being able to continue living in their homes and in the community longer,” she said.

But that doesn’t cover everyone. Most older small-city and village residents can’t find advanced care without moving to Juneau, Sitka, Ketchikan or beyond.

And if they do, they find a shortage of nursing home and assisted living beds, as well as specialists familiar with their problems.

How hard is it to find assisted living in Southeast? Here’s the story.

“We don’t have a pulmonary doctor. We don’t have a cardiologist,” said Dr. Susan Hunter-Joerns, the only neurologist in Southeast. She helps diagnose dementia, among other disorders.

“We don’t have rheumatology, don’t have a plastic surgeon anyone, do have orthopedic and physical medicine rehab, but many times there are surgeries that need to be done that are not done frequently enough up here. And have to be done down south,” she said. 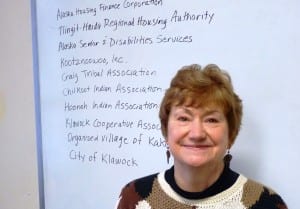 Southeast Senior Services Director Marianne Mills poses with a partial list of other organizations it works with. (Ed Schoenfeld,/CoastAlaska News)

Southeast Senior Services Director Marianne Mills says her organization works with everyone it can.

“No single agency provides all the continuum of care for older Alaskans,” she said. “So, we need to be really on top of what services are out there.”

She says one goal is to help people live independently as long as possible. That can be as simple as rebuilding a doorway to make a bathroom accessible – or making sure a floor isn’t too slippery.

“When someone breaks a hip, often times they’ll go to the hospital and then live the remainder of their days in the nursing home and their lifespan will be decreased,” she said.

She says institutional care can cost nearly a quarter-million dollars a year in Alaska. Home and community-based care costs around a tenth of that.

Does Southeast have day programs for seniors needing assistance? Here’s the story.

While the growing older population stretches services, those programs are facing challenges as state and other government budgets shrink.

Mills notes an outreach program — targeting some of the most vulnerable people – recently got the ax.

“Last July, we had a program to identify seniors that are having problems with substance abuse or mental illness,” she said. “And then, all the grantees were notified the program was closing.”

Back at Juneau’s Fireweed Place, Mary Lou Spartz ponders some of the frustrations of growing older in her hometown.

She’s worked most of her eight-plus decades, including as a senior advocate. And she’s watched as older residents’ benefits and exemptions shrank or went away.

“The attitude is people who grow old, what are we supposed to do with them? They’re just a burden. That’s not the way I think we should be thought of,” Spartz said.

And it should be no secret to anyone the numbers are growing. Researcher Meilani Schijvens says we’ve known about this trend for a good 40 years.

KTOO’s Elizabeth Jenkins contributed to this report. Further reports in our Aging Southeast series will take a look at the region’s limited assisted living programs and the economic ups and downs of our rapidly expanding senior population.