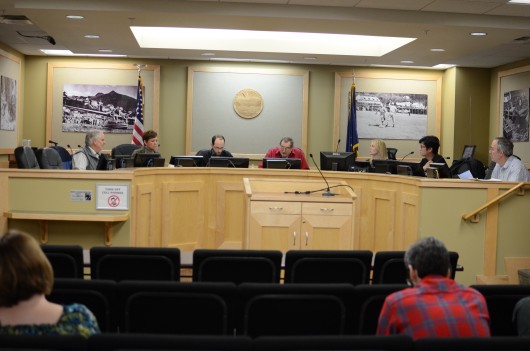 Members of the School Board and Borough Assembly meet on February 9, 2015 as a liaison committee.

Since 2012, the Ketchikan Gateway Borough Assembly and Ketchikan School Board have argued over contracted services. The fight over a relatively small piece of the district budget has infiltrated nearly every public meeting for the past four years.

The fight is over money.

The services range from students learning to swim at the borough-owned Gateway Aquatic Center to the School Board holding meetings in Borough assembly chambers.

The district has disputed specific amounts, which is why this year after some scrutiny the borough lowered the fees by about $140,000. Whatever the figure is, though, the school district receives money from the borough to pay the bill.

So if the bill is getting paid, why does the amount matter?

Well, there are two major points of friction. The first is whether the accounting is fair.

Schools Superintendent Robert Boyle said while the borough covers the cost of contracted services, the charges still affect district finances. “It’s a pass through accounting process that ends up on our books in a way that doesn’t necessarily represent our expenses.”

The School Board argues that more money toward contracted services means less money going directly to educate students. Boyle said that since 2012, contracted services has grown from nearly 10% to a bit over 20% of the discretionary funds the district receives from the borough.

Borough Manager Dan Bockhorst said the numbers correlate, but they have no causation. “If the contractual services figure increases, it does not necessarily drive a decrease in the discretionary cash contribution. It is not an influence on that. They are not related.”

Bockhorst saids charges to the district have been made in good faith and the method of reporting the value of the services provided on behalf of education follows the law. School District officials have disputed both of those claims.

Recently, in Assembly chambers, members of both bodies met for their regular liaison committee meeting, and contracted services inevitably came up.

Borough Assembly Member John Harrington said the bodies need to compromise and move on.  “Because, frankly this does take an extraordinary amount of time and effort and because it’s that lightning bolt type thing, everything else gets fastened on this topic. That it gets mixed up in funding levels, it gets mixed up in anger regarding other issues that both of our bodies get to. So somewhere along the line we have got to get away from this.”

During a January 27th School Board meeting, Superintendent Boyle gave a nearly two-hour history lesson on contracted services. Some veteran Board members commented that, although lengthy, the explanation was the clearest they heard. For recent Board Member Matt Eisenhower, though, that was not the case.

“I stuck this mint in my mouth because I’m trying not to talk, but I’ve been here only three months and I’m so darn tired talking about this. Here we are at 8:30 when there is important issues our school district needs to address and we’re still beating this horse time and time and time again.”

The issue also has taken up a significant amount of time during Borough Assembly meetings, and required staff time from the borough and school district to research and compile reports on the topic.

School Board President Michelle O’Brien said the debate over accounting has been a distraction from another bigger issue. “ I think this extenuated  conversation has only resulted in hindering us from actually discussing what we should have been discussing all along, which is what is the appropriate level of funding to  directly educate our students.”

Whether or not the district is adequately funded is the other large point of friction.

Assembly Member Bill Rotecki recognized this, as well. “I have a fear that this discussion and some others really are, on some people’s part, a way of not addressing we have a difference here in the budget presented yesterday between the $7.9 million and the requested $ 8.8 million and if that’s really what it’s all about, let’s talk about that. Let’s not waste hundreds of hours on accounting procedures or even necessarily philosophy.”

The School Board and Borough Assembly may continue to disagree on what adequate school funding looks like, but if they can figure out a way to agree on and follow specific accounting procedures, they may save a lot of time.