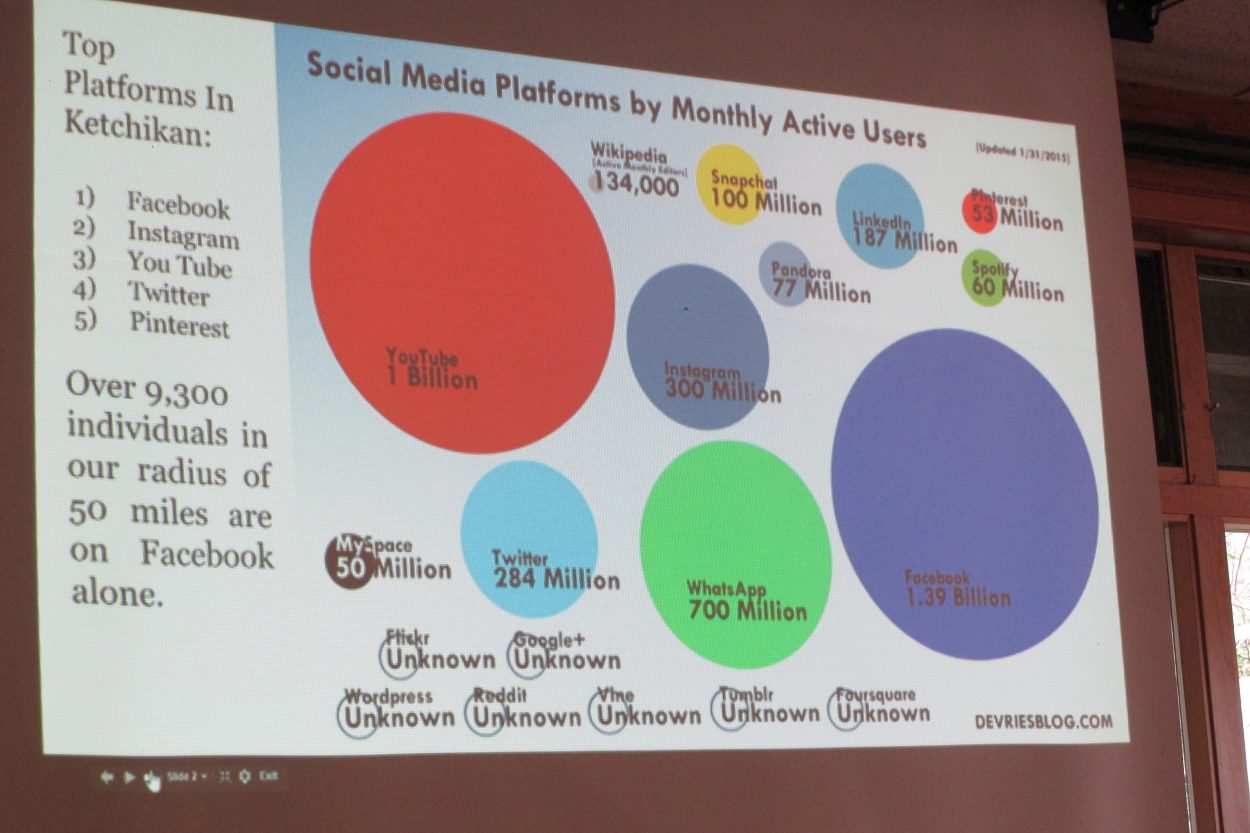 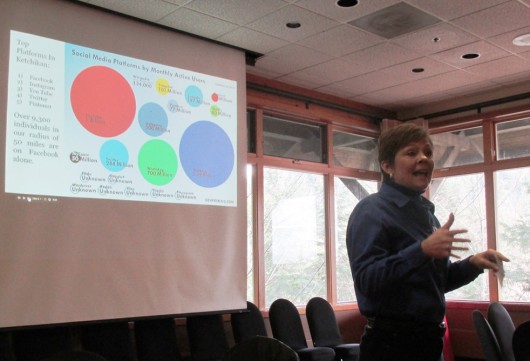 Michelle O’Brien talks about social media for businesses at this week’s Ketchikan Chamber of Commerce lunch. (Photo by Leila Kheiry)

Social media is a powerful tool for businesses worldwide, and some businesses use that tool better than others.

Ketchikan Public Utilities Marketing Manager Michelle O’Brien has invested a lot of time studying social media and how best to reach local audiences. She shared some of that information during Wednesday’s regular Ketchikan Chamber of Commerce lunch.

O’Brien said there are different kinds of people who use social media. Some are power users – they’re on Facebook, for example, throughout the day, post often and have many “friends.”

“Who here would be called a lurker?” she asked.

“If you’re a lurker, typically you’re a grandparent, which by the way, you’re also the fastest growing segment of Facebook users.”

A few people raised their hands. A few others responded when O’Brien asked who had trouble simply turning on a computer.

That’s fine for individuals, but these days, she said, a business needs to use social

media, and use it well, to stay competitive. Luckily, though, O’Brien said Ketchikan’s social media atmosphere is relatively simple, “because if we were sitting, talking in Seattle, Oklahoma City, or a small city somewhere in the Lower 48, we’d be having an entirely different conversation, because it’s much more complicated to operate social media in those types of markets.”

O’Brien said for Ketchikan, Facebook is the equivalent of a live news feed.

O’Brien said the big reason a business needs to be on social media is not necessarily to increase business; the online conversation and connection with customers is key to maintaining a business.

And, she said, most people now expect that kind of connection.

“If your business is not on the Internet, if your business is not in social media, the largest segment of our population is made up of Millennials,” she said. “You are rapidly becoming obsolete. Think about that. It’s not enough just to have a website anymore. You need to be active in having that conversation.”

OK, now that you’re convinced: How do you do it? O’Brien gave a brief overview of social netiquette.

First, she said, establish a policy and make it public.

Next, she said, is to be friendly and polite in all your posts; and keep social media announcements interesting with a variety of topics. That said, you also should know your audience and what kinds of information that audience is seeking.

O’Brien stressed that businesses should not delete negative comments, unless those comments violate the established policy. Instead, she said, respond the way you would respond to an in-person complaint.

“You need to listen to them and you need to appropriately respond, in a really polite way,” she said.

The page also needs a voice. Depending on what kind of business, that voice could be fun, upbeat, serious or informative, but once that’s established, O’Brien said, it needs to be consistent.

As far as Facebook posts go, photographs – especially of kids — are popular and tend to reach the most people. Videos are popular, too. But, she said YouTube links are buried by the Facebook algorithm, because Facebook wants people to upload videos directly, rather than through another platform.

Another big social media platform in Ketchikan is Instagram, which is an image-sharing site popular with a younger demographic.

“You’ve got all of the people that are 45-plus that are really, really using Facebook – highest demographic there,” she said. “And you’ve got 18-30-year-olds hanging out on Instagram all the time.”